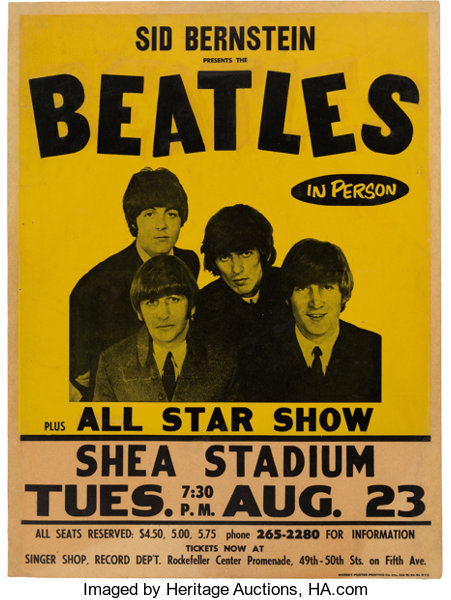 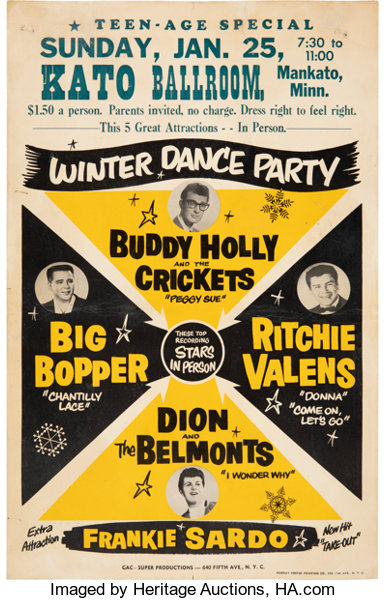 Heritage wrapped their Entertainment Auction with some box office results, grossing $1,681,747, more than doubling the preauction estimate. Leading the sale was the rare 1966 Beatles concert poster for their performance at New York’s Shea Stadium, which hit the high note of $137,500. That sale set a world record for most expensive concert poster ever sold at public auction.

For the last 54 years, the cardboard advertising poster for the Fab Four’s concert had been in the possession of a Boston family of Beatles fans. Heritage previously sold a Beatles Shea Stadium poster for $125,000 in November 2019.

“This sale reinforced that music and entertainment memorabilia is something of a time capsule, mementos that preserve the work of great artists for their biggest fans,” said Pete Howard, concert posters expert at Heritage. “The Beatles’ Shea Stadium poster is considered one of the hobby’s holy grails, so we can’t be too surprised that it set the all-time record for a concert poster … and the demand for this poster is such that the winning bidder still might have gotten a bargain.”

The Buddy Holly & The Crickets rare 1959 Winter Dance Party concert poster finished at $125,000. This rare poster promoted a concert in Mankato, Minnesota, on January 25, 1959, just eight days before the final performance of the tour. Of the five acts that appeared, Buddy Holly, the Big Bopper, and Ritchie Valens were all killed in a plane crash not long after the concert.

Michael Jackson’s personally owned crystal studded glove worn on stage during the HIStory World Tour destroyed its preauction estimate of $4,000 when it soared to $106,250. The glove, which was worn during the 1996-1997 tour, had been donated to UNICEF in 1998 to help raise funds for the organization.

A Whitney Houston stage-worn Dolce & Gabanna fur coat sparked competitive bidding to push it to $42,500 – 14 times the preauction estimate of $3,000. Houston wore the one of a kind coat during her 1999 My Love Is Your Love tour.

A “TCB” necklace that Elvis Presley gave to George Klein hammered for $18,750. The necklace represented the phrase “Taking Care of Business,” which was a memento that Elvis gave to special people in his life, including Klein, a Memphis DJ and lifelong friend.

Other top lots included a Grateful Dead 1966 Skeleton and Roses FD-26 concert poster signed by Mouse and Kelley for $17,500 and their ’69 Hawaiian Aoxomoxoa poster by Rick Griffin for $16,250. A Jimi Hendrix ’68 Fillmore East FE-7 poster and his personally owned and worn tan-colored suede vest each sold for $15,000. The Rolling Stones debut LP US promotional poster and a signed Fender Squier Telecaster copy electric guitar both went for $15,000.