American Mythology Steps Through the Stargate 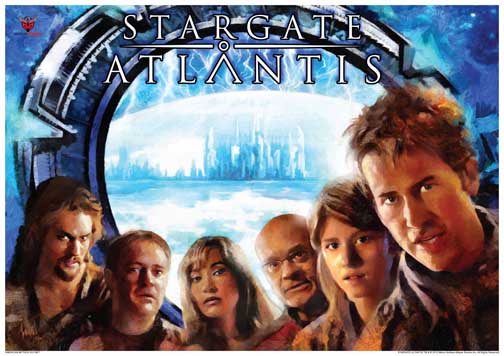 The 1994 MGM feature film Stargate was a rather quiet, unassuming success, an enjoyable film that, as it turned out, showcased only a modicum of its true potential. It wasn’t until its TV series scion, Stargate SG-1 began its 10-year run in 1997 that fans began to realize its true potential.

“Even that, though, it was only the beginning. Enroute to the longest run of any American science fiction television series, the show unlocked not only the potential of the franchise, but firmly established it as a multi-show franchise,” said Barlow Jones, Marketing Manager for American Mythology Productions.

“Stargate Atlantis, which launched in 2004, and Stargate Universe, which first aired in 2009, not only attracted fans of the original movie and the original series, but they also had their own fans and unique takes on their shared reality. We’re very happy to be bringing these two series back in comic book form,” he said.

The fledgling comic book publisher announced two weeks ago that the had landed the first ever comic book license with likeness rights for The Three Stooges, and Jones intimated that they weren’t done with their announcements yet. For the moment, though, he only wanted to talk about their latest two reveals.

“New worlds, alien races and ancient mysteries await discovery as American Mythology Productions steps through the Stargate into an exciting, far-reaching, danger-filled realm of possibilities,” he said. “And yes, I’m a marketing guy, but I promise you that’s not just hyperbole.”

First out of the gate, so to speak, according to Jones, will be Stargate Atlantis: Season 6, a new monthly title continuing the events from the climactic end of the hit TV show’s fifth season. Lt. Colonel John Sheppard, Ronon Dex, Teyla Emmagan, Dr. Rodney McKay, Richard Woolsey, Dr. Jennifer Keller and the series’ many other familiar characters will be up against dangerous new foes who threaten everyone from the distant Pegasus galaxy to the Earth itself.

Following that, AM will launch a monthly Stargate Universe, the details of which Jones wasn’t quite ready to share just yet.

“For fans of Stargate Universe, we have something really special planned, and as a fan of the show myself I can say it’s going to be very cool. We’re going to get to know Dr. Nicholas Rush, Eli Wallace, Colonel Everett Young, Camile Wray and the other Destiny crew members very well,” he said.

The schedules and creative teams for these series will be announced shortly, and there’s even more Stargate news to come from AM in the near future. The first issue of Stargate Atlantis will be featured in the January 2016 issue of PREVIEWS from Diamond Comic Distributors. It will hit comic shops in March.

Also created by Robert C. Cooper and Brad Wright, Stargate Universe debuted October 2, 2009 and ran for two seasons totaling 40 episodes before ending its run on May 9, 2011. Despite its relatively brief run, the series attracted a very loyal following and featured the talents of Robert Carlyle (Once Upon A Time) as Dr. Nicholas Rush, Louis Ferreira (Breaking Bad) as Colonel Everett Young, Ming-Na Wen (Marvel’s Agents of S.H.I.E.L.D.) as Camile Wray, and David Blue (Ugly Betty) as Eli Wallace, among others.

“When you talk about taking your first steps into a bigger universe, it’s hard to get bigger and bolder than the cosmos available to our creative teams through Stargate Atlantis and Stargate Universe,” said American Mythology publisher Michael Bornstein. “The talented people at MGM and the creative geniuses who developed these shows populated them with great characters, steeped them in strong continuity, and fueled them with an epic sense of action and adventure mixed with wonder. We’re looking forward to continuing these two great series, with more to come.”

“Stargate Atlantis: Season 6 and Stargate Universe will build on the excellent traditions of both of these well-loved TV series. Fans of these two shows will soon discover that their favorite characters are in great hands with American Mythology and our creative teams,” Bornstein said. “We’re going to build on what’s come before and deliver a true Stargate experience.”