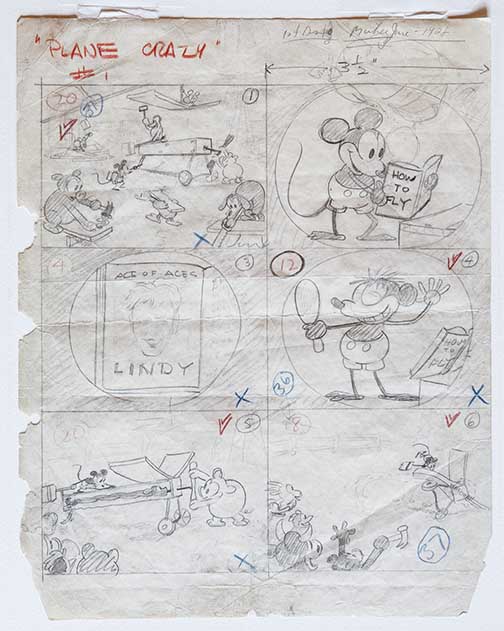 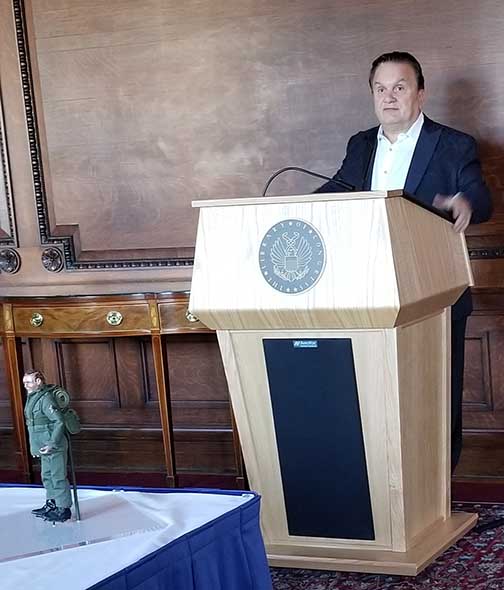 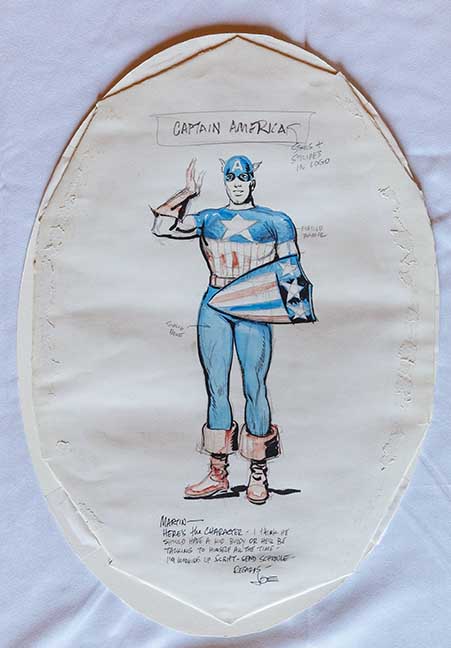 Selections from the Stephen A. Geppi Collection of Comics and Graphic Arts went on display in the Great Hall of the Thomas Jefferson Building at the Library of Congress on Tuesday, November 6, 2018 and already people are taking note.

From The New York Times to industry site ICV2.com, and from the collectibles-friendly Auction Central News to comics-centric First Comics News, the exhibit, which runs through February 11, 2019, has garnered media attention.

For 23 years, first at Diamond International Galleries, and from September 2006 until June 3 at Geppi’s Entertainment Museum, Baltimore had something of an exclusive on these treasures, but Geppi said he always wanted them to be seen by a larger audience.

“Now, with the Library of Congress’s more than 1.9 million onsite visitors a year, we not only have the opportunity to have them seen by a greater potential number of people, but I believe we have a chance to help them grow that number even bigger,” Geppi said.

He said he got the first taste of putting comics before the mainstream public when he opened his Geppi’s Comic World store in Baltimore’s Harborplace development in the early 1980s. The reactions confirmed and honed his instincts, but in truth it wasn’t the first time he tried to share his passion with “civilians.”

“As my family and friends could tell you, I was truly trying to share my excitement well before that. It actually started when I first discovered comics. When I picked up my first issue of Batman at age 5, I couldn’t help but share my excitement, first with my brother, then the rest of my family, and then my friends. I remember thinking ‘This stuff is great! I can’t wait to share it with so-and-so.’ Each step after that has really flowed from those first thoughts,” he said.

Prior to last week, he hadn’t seen the items selected for this exhibit since they were picked up by the Library of Congress’s team a few months ago. He said to see them again in such a distinguished setting, to see them treated with such respect, and to know what Carla Hayden and her team have in mind for them, was truly humbling.

He also said people would be impressed to know how quickly the Library of Congress staff moves when changing out their displays.

Visitors in the Library at closing time on Monday, November 5, would have seen no trace of the items from the collection, but visitors who arrived for the Library’s opening on Tuesday, November 6 would have found them on full view.

With millions upon millions of items in the Library’s collection, inventorying, preserving and caring for the pieces are such units as the Prints and Photographs Division, Serial and Government Publications Division, and the Rare Book and Special Collections Division, which have responsibility for specific types of items.

After the selection is made for a presentation, these custodial divisions coordinate bringing the items under their care together as a layout is created for the display cases. Once the selections are made and the descriptions are written, the design of the cases is completed.

On the morning such a display is to be mounted, the staff arrives before the Library opens to the public, stages the items in the display case based on the designs, and moves the cases out to their designated positions by the time the public comes in. The turnover is swift and occurs with an impressive, well-practiced precision.

The display cases themselves are impressive. Although in the Library’s parlance they are “Agile Display Cases,” they make a striking impression. They are climate controlled and fitted with special fabric that does not harm the material being presented. The cases are locked and alarmed, and they have special low-level lighting to prevent damage to color of the items being displayed.

The Library of Congress staff impressed Geppi with their selection of items as well.

“When we had the collection on display at Geppi’s Entertainment Museum, you might well have a $100,000 item right next to a $10 item because it was never about the dollar value. You can trust that I loved being the custodian of the Plane Crazy storyboards or the Captain America concept drawing, but I was just as happy to see other items such as Marvel Comics’ G.I. Joe #1 from 1982 among these selections. Why? Because that’s an important memory for someone!” he said.

“Whether we’re talking about Big Little Books, comic books, pulps, movie posters, action figures or any of the other items, the displays are conversation starters. The familiar refrain of ‘I had that!’ can bridge a lot of gaps between people, and I’d love to think that my collection can play a role in getting people talking. Wouldn’t that be great?” he said.