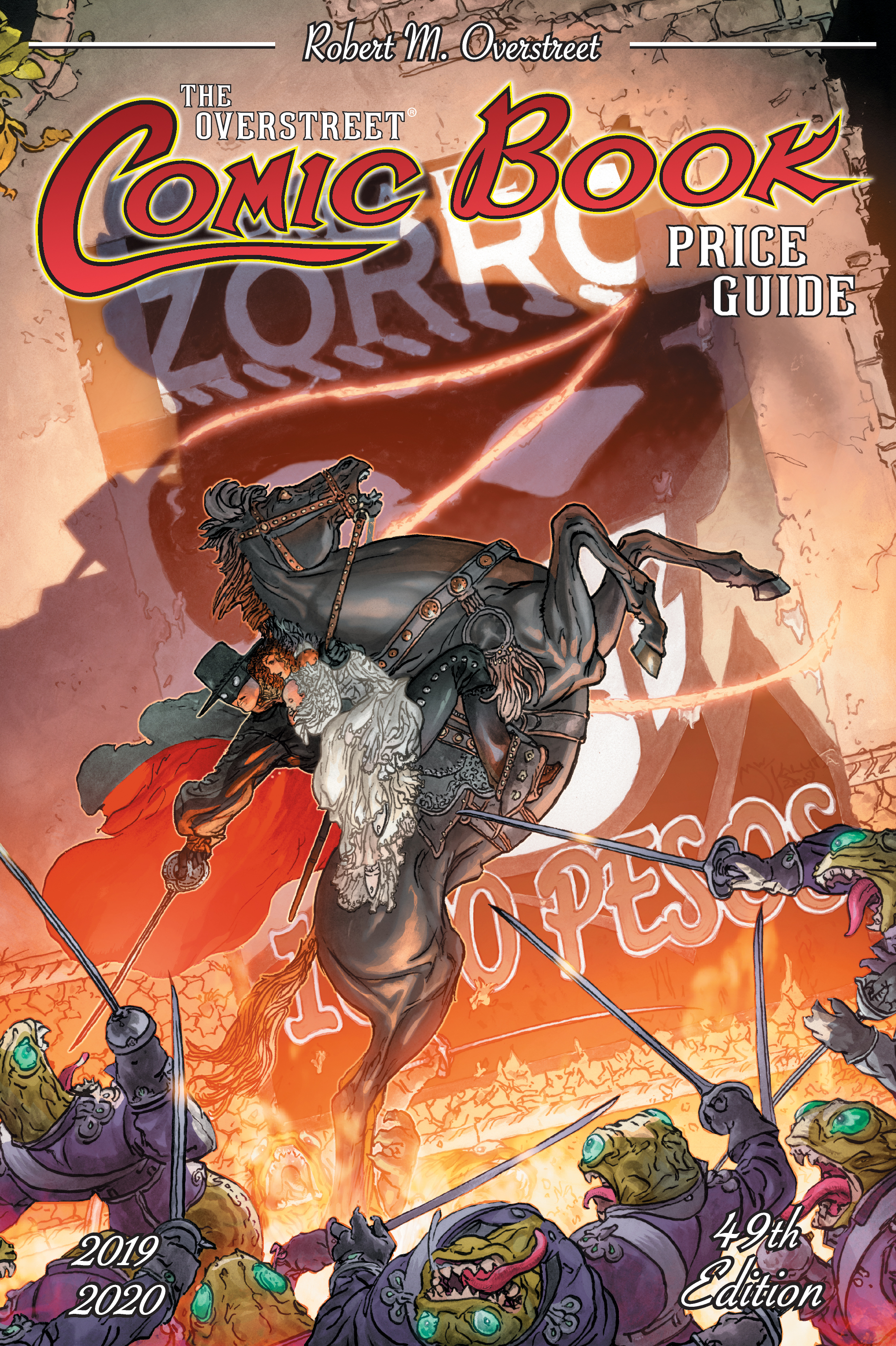 Artist Michael Wm. Kaluta turns his attentions to El Zorro, the Fox, in celebration of the character’s 100th anniversary for the cover of the Hall of Fame edition of The Overstreet Comic Book Price Guide #49 from Gemstone Publishing, which will be featured in the April 2019 PREVIEWS from Diamond Comic Distributors.

Johnston McCulley’s Zorro made his debut in the novel The Curse of Capistrano, which was serialized in five installments that ran from August 9 to September 6, 1919 in the pages of All-Story Weekly, a pulp magazine. Douglas Fairbanks and Mary Pickford chose The Mark of Zorro, its adaptation, as the first film released by their company, United Artists. Since then, “The Fox” has gone on to enjoy a healthy fictional career in film, television, novels and comics around the world.

Kaluta is no stranger to Zorro or dozens of other pop culture icons. After breaking in at Charlton, he became known for illustrating Edgar Rice Burroughs’ Carson of Venus for DC in 1972. The following year he moved on to what for many is his signature work, a run on The Shadow, also for DC. He has revisited the character a number of times.

In the decades that followed, Kaluta established himself as a premiere cover (and too infrequently interior) artist on an array of titles and characters ranging from “I, Vampire” in House of Mystery to Madame Xanadu, and from Conan The King to The Spectre. With writer Elaine Lee, he has produced a number of Starstruck tales. Among other projects, he has currently been providing covers for American Mythology Productions’ Zorro comics.

The book is scheduled to go on sale Wednesday, July 17, 2019. The April PREVIEWS can be found online at PreviewsWorld.com on Friday, March 22, and in print at local comic shops on Wednesday, March 27. The hardcover carries a $35 cover price, while the softcover is priced at $29.95

Overstreet has been The Bible of serious comic book collectors, dealers, and historians since it was first published in 1970. In addition to the special features on Zorro’s 100th anniversary, CBPG #49 features updated comic pricing, a remembrance of Stan Lee, and a look at Batman’s 80th and other character anniversaries as well.

“We would like to thank Zorro Productions and our friends at American Mythology for helping us to arrange this cover. It was sort of amazing to realize that Michael Wm. Kaluta had never done a Guide cover, and we’re very pleased to have remedied that omission in such grand style,” said J.C. Vaughn, Vice-President of Publishing for Gemstone Publishing. The announcements of the cover artists for our main cover and The Big, Big Overstreet Comic Book Price Guide #49 will follow on March 20 and 21, respectively. The announcement for the Firefly cover can be found elsewhere on Scoop.