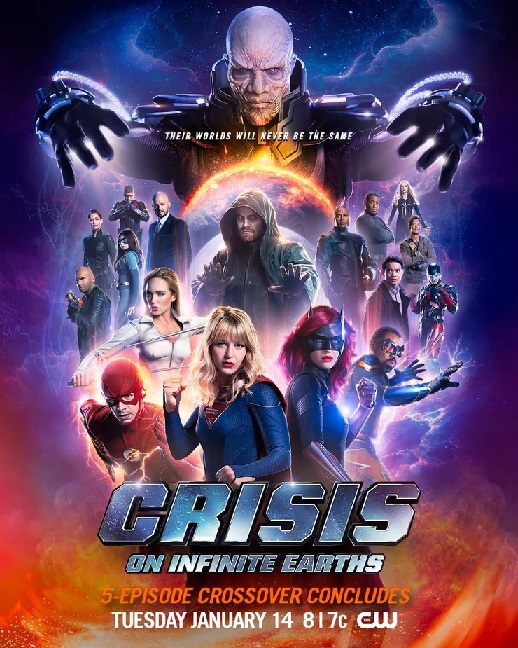 The “Crisis on Infinite Earths” Arrowverse crossover will come to a close next week. The final two episodes will air on Tuesday, January 14, 2020, on Arrow and Legends of Tomorrow, the latter of which begins its fifth season.

The crossover began in December with the first three episodes airing on Supergirl, Batwoman, and The Flash. Most of the Arrowverse heroes and their teams gathered to save the universe from the Anti-Monitor, who has been destroying Earths in the multiverse.

The first part ended in a cliffhanger with the Paragons, those heroes most likely to stop the apocalypse, stuck in the Vanishing Point with the Anti-Monitor still on the loose. It also began the mystery surrounding Oliver Queen who accepted his destiny as the new Spectre after he was sought by former police officer Jim Corrigan to take the position.

A week ahead of the crossover, a new promotional poster was released, promising that “Their worlds will never be the same.” Supergirl, Batwoman, the Flash, White Canary, Black Lightning, and Green Arrow take the center, surrounded by other heroes with the Anti-Monitor looming over them. One of the poster’s most notable aspects is Oliver’s incarnation as the Spectre, sporting a look that melds his Green Arrow costume with the iconic Spectre cape.

The CW has promoted the remaining episodes as being a gamechanger for the Arrowverse, though, they haven’t revealed much about what will happen to the Arrowverse after the crossover. Arrow will air its final two episodes after the crossover, one of which will be the backdoor pilot for Green Arrow and the Canaries, followed by the series finale on Tuesday, January 28. Supergirl and Black Lightning could make the move to Earth-1 with the other shows, after the destruction of their homes. The Legends crew will entertain a period of being celebrities and The Flash will have post-Crisis effects that will last for the remainder of the season.