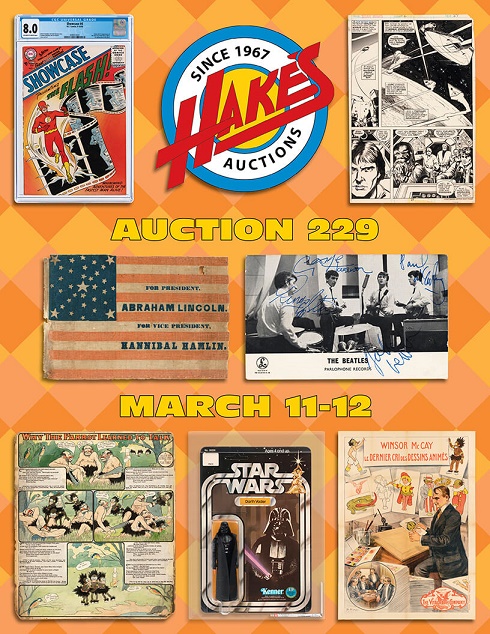 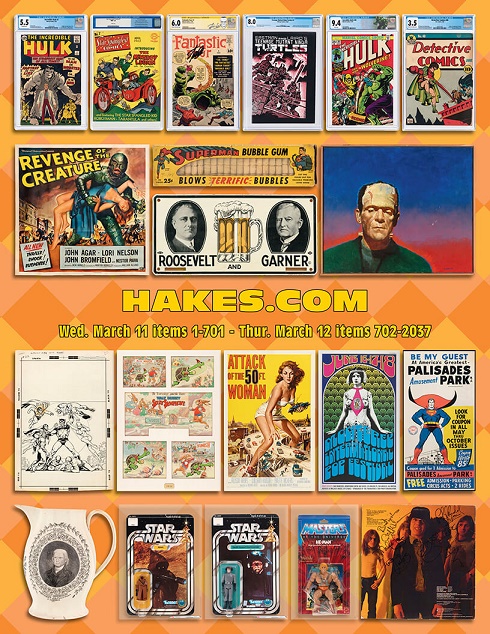 The first Hake’s Auctions premier event of 2020 opens for bids on Tuesday, February 18. Hake’s has gathered another assemblage of material from historical and political to pop culture collecting categories, totaling 2,037 lots.

A pair of Winsor McCay pieces are among the focal highlights in Auction #229. The Imps Sunday page original art from 1903 shows the Imps antagonizing cavemen. This example is 1 of only 11 Imps pages by McCay in known existence. Another McCay lot is the Little Nemo linen-mounted cartoon poster from 1911.

Once again, Hake’s will offer the best of Star Wars toys, led by the rare Darth Vader 12-back-A double-telescoping AFA 75 on white stand and the Jawa 12-back-A (vinyl cape) AFA 60 with no punch in the card. Fresh off of the success of the Star Wars #3 original comic page by Howard Chaykin that rose to $33,748, Hake’s is selling another series page by the artist. This time it’s an original Chaykin page from Star Wars #2 from the second part of the New Hope movie story adaptation.

Bidders will definitely come together to bid on a selection of Beatles items. Hake’s has a Beatles Parlophone photocard signed by all four members of the band. The 1962 card is one of the earliest sets of Beatles autographs featuring Ringo Starr who had joined the band a few months prior. There’s also a band-signed 1963 album page in which Paul McCartney added “Love from the Beatles” and Ringo Starr’s personally used Gretsch drumsticks.

The auction contains Remco Universal Monsters action figure original box art for every figure made for the line at the time featuring Frankenstein, Dracula, the Mummy, the Wolfman, Phantom of the Opera, and Creature from the Black Lagoon. A Silly Symphony – The Tortoise and the Hare Good Housekeeping page original art by Tom Wood from October 1934 will be offered. A few posters ready for new walls are the Attack of the 50 Ft. Woman linen-mounted one-sheet and a Woodstock rare bus sign advertising original location.

Hake’s Auction #229 opens on February 18 and runs for three weeks through March 11-12. Interested collectors can bid at hakes.com.