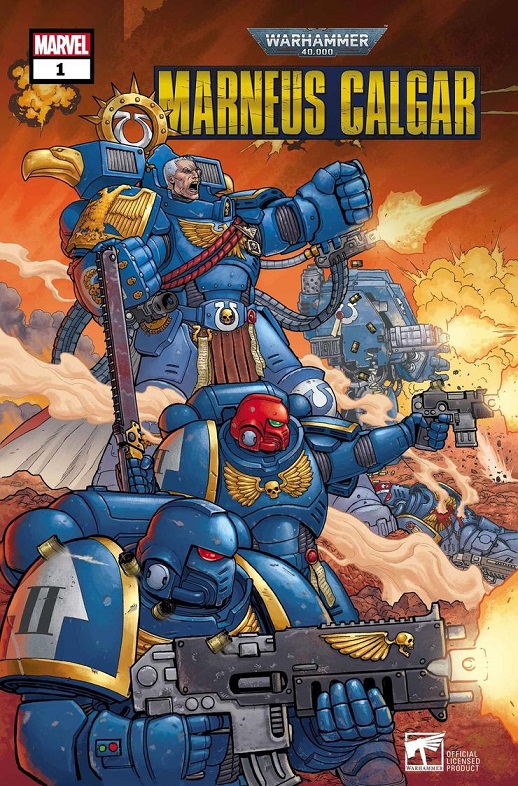 Writer Kieron Gillen (X-Men, Star Wars: Darth Vader) is returning to Marvel to pen Warhammer 40,000: Marneus Calgar, the origin story for one of the most important leaders. Gillen is joined on this Games Workshop and Marvel by Jacen Burrows (Moon Knight, Punisher: Soviet), who provides the artwork.

Warhammer 40,000: Marneus Calgar will tell the previously unseen origin of the titular character. Marneus is chapter-master of the Ultramarines, poster boys for the Imperium’s Space Marine armies. Before becoming one of the most important cyborg soldiers, Marneus grew up on a farming world, defended humanity against the Black Crusades, and dealt with the Black Altar, a new threat that is endangering 500 planets.

Warhammer 40,000 is a popular tabletop wargame that puts players in a war-torn future where humanity fights battles against aliens, occultists, and other beings. Games Workshop developed the game in the late ‘80s, expanded from metal figurines to novels that explore the region’s history, then video games and comic books. This comics venture is the first outing from Games Workshop and Marvel’s partnership.

Gillen’s writing duties have included Uncanny X-Men, Young Avengers, and Thor, along with Star Wars, where he created the popular character Doctor Aphra. He also wrote The Wicked + the Divine, the roleplaying horror adventure DIE, and regularly tweets about Warhammer projects.