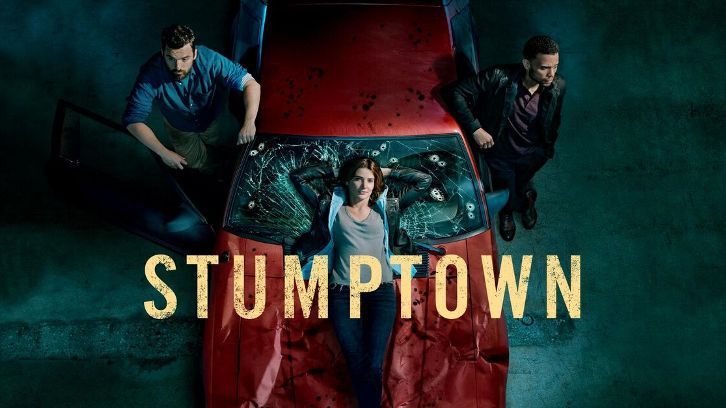 The cast and crew of the TV show Stumptown, based on the graphic novel of the same name, gathered for Comic-Con@Home to reflect on the first season and give a few hints on what’s to come in the sophomore outing. Panelists were stars Cobie Smulders, Jake Johnson, and Michael Ealy with executive producers Jason Richman, Monica Breen, David Bernad, and Ruben Fleischer, and the graphic novel’s writer Greg Rucka.

Rucka opened the conversation by sharing his thoughts on seeing his graphic novel become a television show, watching the characters come to life and how the interpretation differs. Richman talked about what attracted him to the project, how he developed and wrote it for TV, and what changes he made for the ongoing show format.

Bernad and Fleischer explained how they expanded the characters, especially the ones that had smaller roles in the comic, as well as keeping the tone of the graphic novel, and the strength of the ensemble cast. Breen shared her experience joining the show for season two and her reaction to watching the first season, noting the music, the sets, and the realness of the characters.

Smulders gave her take on Dex at the beginning and how the character evolved based on what she went through during the season. She also got into Dex’s military background and how that has shaped here and the positive side of seeing her interacting with other vets. Rucka followed up with why he gave Dex the military background, mentioning how Dex is an update of the private investigator trope and how it affects her character.

Richman told them why he wanted to present the TV series as an origin story of how she became a PI and how she dealt with the problems in her life, like her PTSD. After Richman mentioned Dex’s bisexuality Smulders added her take on that part of the character, saying that Dex is an “up for anything” type of person.

Johnson got into the love triangle aspect of Grey, Dex, and Miles, saying that he didn’t really feel the tension of that, thinking of Grey and Dex as friends. Ealy also covered the topic and how it’s not the typical way that a love triangle is shown on screen. Both actors then discussed what they knew about their characters coming into the show and how they grew and changed as the season went on.

Smulders praised actor Cole Sibus who plays her brother Ansel and how she enjoyed seeing his performance during the first season. Johnson also showed love to Sibus, mentioning how well he hits the emotional moments and could also be funny. Richman also discussed how Ansel’s part in the show became meatier as the season went on especially how the other characters would rely on him.

They got into the season finale and the cliffhangers, Breen pointed to the return of Dex’s mom and how she’ll deal with the abandonment she felt. Johnson mentioned how Grey’s dad could come back and Ealy joked about what career Miles will have since he quit being a cop.

They answered questions on what music they’d like to hear in the second season, who is the most like their character, who they’d like to have on the show as guest stars, and who breaks first during funny scenes.

Richman said that they’ll get into the nature versus nurture aspects of Dex’s personality in the second season. The cast also talked about how much they want to know about a character versus having it revealed as things develop. Johnson praised the communication between the writers and the actors so that everyone was comfortable and happy with what was happening. The panel closed when a few panelists discussed what they’ve been doing while quarantining.

The full text of the Comic-Con@Home panel is available below.