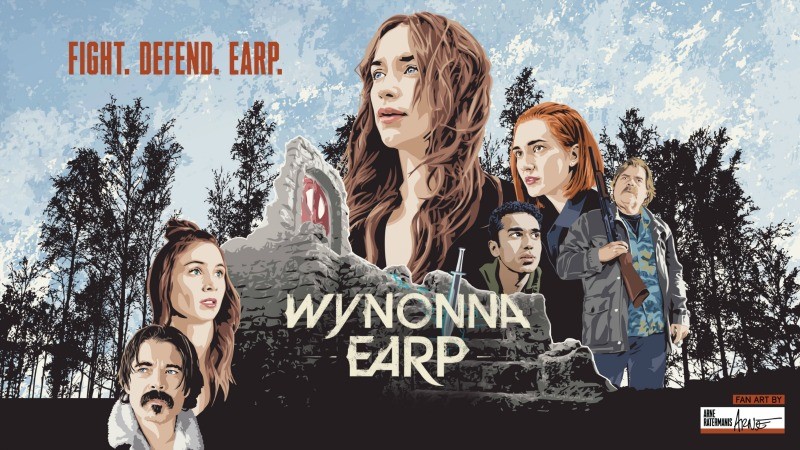 It’s been a long wait for the return of the Wynonna Earp TV show, which has been off the air for nearly two years. A day before season four debuted on Syfy, the show, which is based on the comic of the same name, was featured in a Comic-Con@Home panel. Showrunner Emily Andras and cast members Melanie Scrofano, Tim Rozon, Dominique Provost-Chalkley, Katherine Barrell, and Varun Saranga gathered to answer some questions, play some games, and show a teaser for the highly anticipated fourth season.

A refresher video of the first three seasons was shown, which was accompanied by the cast’s reactions and anecdotes. They reminisced about the trip down memory lane, praised the Earpers who fought for the show, and described how it feels to have the fan support. Andras got into how they can give back to the fans for their support, her plans to keep giving them more of the show, and her feelings for the Earpers’ passion.

The conversation was mixed with heartfelt responses and plenty of humor, starting with how they describe the feeling of stepping back onto the set and getting back together. When asked what they would they put in a Wynonna Earp time capsule, Saranga said a picture of the cast, Scrofano said Wynonna’s pregnancy test and Peacemaker, Rozon said Doc’s gun and his note to Wynonna, and Andras said a copy of comic creator Beau Smith’s original comic.

When asked what their character’s high school superlative would be, they stayed on brand with their predictions, including that Waverly would be most likely to succeed and Wynonna would be most like to make people mad. The next fun question was about how the characters would fare in an escape room, and Andras mentioned the possibility of a Wynonna Earp-themed escape room for conventions.

Getting character specific, Andras answered a question about Nicole’s character, debunking any misconception that she was strictly meant to only have a six-episode arc. She got into the growth and development of the show, noting that they observe what the actors give in their performances and get inspired with new ideas for scenes and storylines.

They played two games with funny results, starting with a trivia game about the cast, including asking what is Provost-Chalkley’s least favorite chore and what student films Saranga was in in high school. Next, they played a game called “The Wheel of Wynonna” where they had to do an impression of different characters from the show. Then, the cast spent some time teasing Rozon with how he says “Wynonna Earp.”

The panel wrapped up with a sneak peek of season four in which Wynonna and Nedley gear up for battle then head out to the staircase to attempt entering the garden to get Waverly and Doc. As things closed, it was mentioned that the show is now airing at 10 PM and has been given a mature rating, which means, as Andras described it, it will be sexier, have more action, and more strong language.

The full Comic-Con@Home panel can be viewed below.