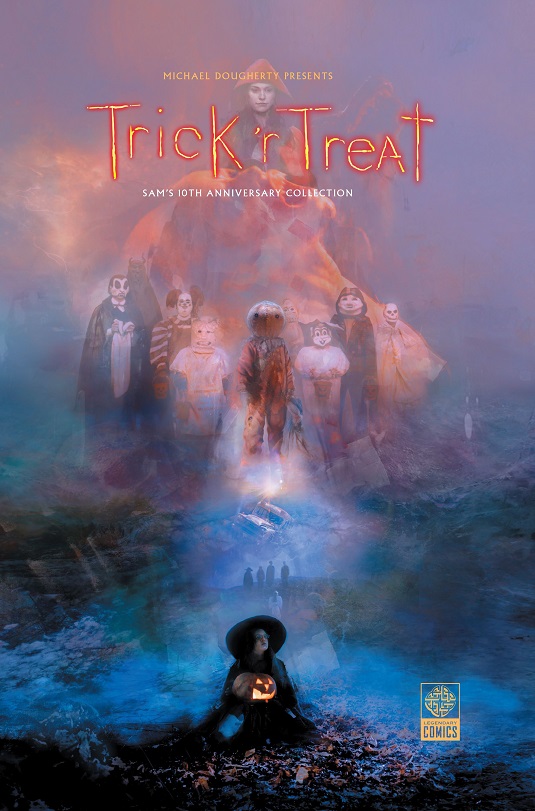 Legendary Comics has released an omnibus of the Trick ‘r Treat comic collection based on the horror anthology film that was released in 2007 and quickly achieved cult status. The comic was conceived by the film’s creator Michael Dougherty, who is also known for writing and directing Godzilla: King of the Monsters and the holiday horror flick, Krampus. This edition brings together the two previously released graphic novels for the first time ever with a new special introduction from Dougherty, new cover art, and other extras.

The graphic novel adaptation of the movie presents four interwoven tales that take place on one shocking Halloween night. Sam, the frightening small figure visits a small town as it celebrates the holiday, unaware of the consequences they’ll face for not following Halloween rules.

In the second half, Trick ‘r Treat: Days of the Dead, Sam takes readers back through time with four new chilling tales. The romance between old world lovers takes a dark turn, Western pioneers learn the dark side of the frontier, horror noir comes to 1950s Los Angeles, and pranksters are taught a lesson in a small town.

“In these unprecedented and hard times, it is important to keep the Halloween spirit alive and I can’t think of a better way to kick off the season than sharing it with the Halloween icon Sam in this special Trick ‘r Treat collection,” Legendary Comics Senior Vice President Robert Napton said. “Fans of the film who want to revisit these twisted stories, as well as new readers discovering them for the first time, are in for a real treat. And, as we embark on new ways to celebrate Halloween with virtual trick or treating and drive through haunted houses, just remember to uphold the old Halloween traditions as well and keep your jack ‘o lanterns burning or you might just find Sam at your front doorstep.”

“Even if we can’t have Halloween parties or go trick or treating this year, I hope this compilation will help readers conjure Sam and that special spooky season magic he brings,” Dougherty said. “Because as much as the holiday has become about costumes and candy, Halloween was always meant to be a celebration of those who’ve passed, so I can’t think of a better time to gather around a glowing jack ‘o lantern sharing stories that honor the best night of the year.”

It is now available on the Legendary Comics website.