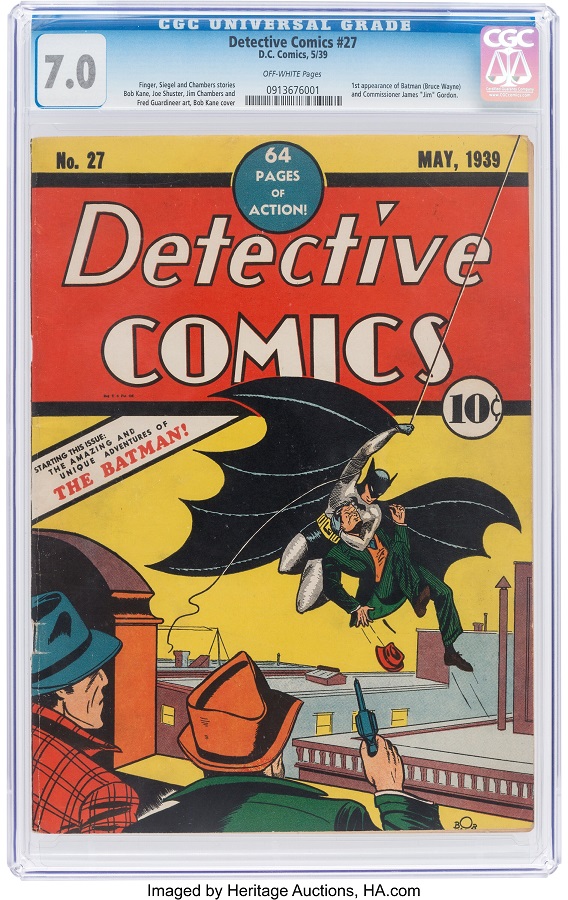 The Dark Knight just set a world record. A copy of Detective Comics #27 CGC 7.0, which houses Batman’s first appearance, sold for $1.5 million in Heritage’s Comics & Comic Art Auction on November 19, 2020. That sale makes it the highest price ever realized for a Batman comic book.

The Caped Crusader’s debut sold during the first session of Heritage’s four-day auction that runs through November 22, 2020. This sale broke a decade-old record for a Batman title, besting the sale of another copy of Detective Comics #27 CGC 8.0 that realized $1,075,000 in February 2010 – also at Heritage.

It also beat the in-house record for most expensive comic book ever sold at Heritage, by exceeding the sale of Marvel Comics #1 CGC 9.4 that hammered for $1.26 million a year ago in November 2019.

The CGC census lists only two copies at the 7.0 grade, with only five copies of the important book listed in higher grade condition. Even before the live auction opened at 12 PM on Thursday, online bidders had pushed this copy of Detective Comics #27 to over $1 million.

“I’m not at all surprised at the result,” Barry Sandoval, Heritage Vice President said. “After all, this is one of the best copies you will ever see of one of the most important comic books ever published.”

Batman is represented elsewhere in this auction, through the storied The Alfred Pennyworth Collection compiled by Randy Lawrence. This collection is not only a CGC award-winner, but also the collection that made international headlines in January 2019 when it was stolen, then again when the collection was found. On Thursday, the copy of Batman #2 CGC 9.0 realized $63,000. (More on that story can be found in previous Scoop coverage.)