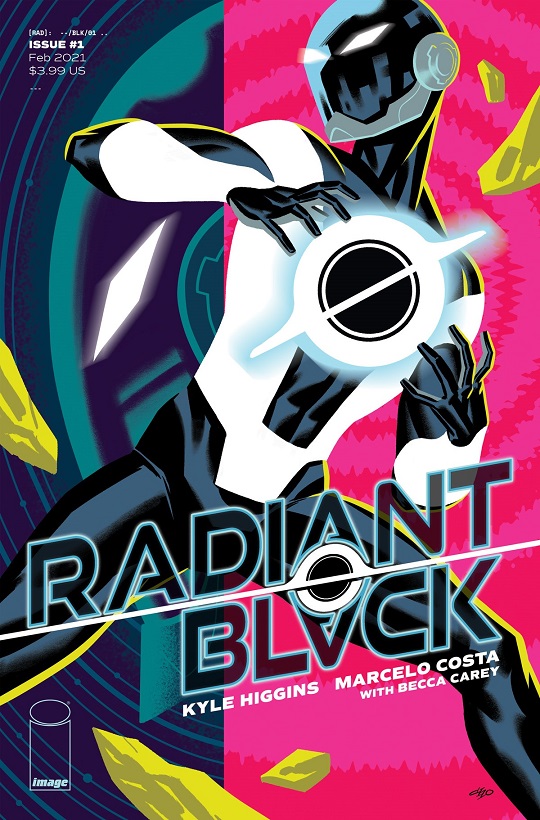 Radiant Black #1 introduces Nathan Burnett, a man who’s just turned 30, has credit card debt, and is looking to move in with his parents. Things change when Nathan discovers and unlocks the ethereal, cosmic Radiant, which gives him power to change his fortunes. The problem is that the powers don’t belong to him and the Cosmic Beings who created them want it back, no matter what.

“This is the comic book I’ve been waiting my whole life to make – being able to build this with Marcelo Costa, Becca Carey, and Michael Busuttil is a dream come true,” Higgins said. “Radiant Black is both a love letter to the superhero stories I love as well as a statement on what I think superheroes can be for a whole new generation.”

“Radiant Black has two things that I love – superheroes and Sentai. When Kyle told me he wanted to mix these two worlds, it was immediately interesting to me. I knew we had the opportunity to create something very special here, especially because of the characters and the timely challenges we’re building for them,” Costa told io9 in an interview.

“It’s been a few years since Kyle first pitched the idea of a new superhero series, but from the moment he mentioned it, I was in,” Eric Stephenson, Publisher & Chief Creative Officer at Image, said. “Kyle’s superhero work speaks for itself – especially his epic run on Power Rangers and the hugely successful ‘Shattered Grid’ event – so the idea of Kyle taking the skills he’d honed on work for hire superheroes and developing something of his own just seemed right to me. We’ve spent a lot of time talking superheroes over the last couple years, and it’s been incredible to watch this all come together!”

Radiant Black #1 will be in comic book stores on February 10. It comes with a cover A by Michael Cho, cover B by Eduardo Ferigato and Costa, cover C blank cover, cover D (1:10 incentive) by Costa, and cover E (1:25 incentive) by David Finch, Jimmy Reyes, and Costa.