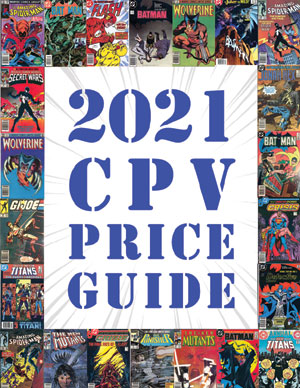 The 2021 edition of the free online guide caters to collectors interested in Canadian Price Variant (CPV) newsstand comics of the 1980s and 1990s, also known as “Type 1A Price Variant” comics. The guide’s new official website, www.cpvpriceguide.com, has seen substantial growth in hits this year, with total website traffic surpassing the one million hits mark, and monthly hits up over 100% year over year, according to historian and Overstreet Advisor Jon McClure who co-created the guide.

This year they are joined by former CBCS International Comics Specialist Tim Bildhauser. “I am very pleased to join the CPV price guide team. This year we saw unprecedented CPV sales, some of which were record highs and others that are so consistent that they firmly established the fact that mainstream collectors have accepted and embraced CPVs as an unquestionably legitimate part of the hobby,” Bildhauser said.

Together the collaboration team announced the release of their fourth edition, The 2021 CPV Price Guide for 1980s & 1990s Canadian Price Variants (Type 1A). The new 2021 edition of the guide features 99% picture coverage of the Marvel and DC variants, a robust market reports and articles section, and several new features. It has been published online at cpvpriceguide.com.