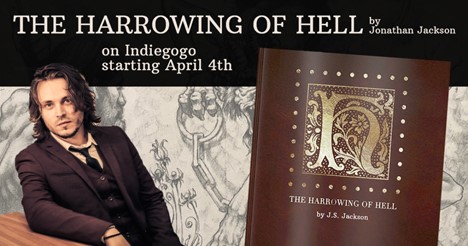 Actor Jonathan Jackson, known for a variety of roles that include General Hospital, has penned a book about the battle between good and evil. The Harrowing of Hell is told as an epic poem, in the vein of John Milton’s Paradise Lost, and comes with original illustrations by fine artist Nathan Jacobs. It is currently seeking backers on Indiegogo.

Centered in Christianity, the poem explores what could have happened between Jesus Christ’s crucifixion and resurrection.

“In the ancient Christian Tradition, it is said that Christ not only suffered and died on the Cross physically, but that He also descended into Hell (Hades to be more precise) to destroy the power of death and rescue imprisoned souls, breaking the iron bars of Death and Hades,” Jackson’s Indiegogo statement reads.

Jackson’s acting career began with the family comedy Camp Nowhere, followed by guest appearances in Boy Meets World and starring roles in Insomnia and Tuck Everlasting. He is a five-time Daytime Emmy winner for his role as Lucky Spencer on General Hospital. Jackson played a young Kyle Reese on Terminator: The Sarah Connor Chronicles and most recently he starred in Nashville.

According to the campaign, Jackson has been working on the book for the last ten years and it was partially inspired by his son’s imagination and preference for dramatic stories with heroes like Hercules and Beowulf.

The Indiegogo campaign goal is $50,000 and will be open through the month of April. Perks start at $25 for a copy of the E-book, a hardcopy with E-book and illustration is $75, a signed copy and previous perks is $200, and a signed hardcover plus a video call with Jackson is $500.