Friday, October 7, 2022
Scoop is a totally free e-newsletter, produced for the benefit of the friends who share our hobby!
Home 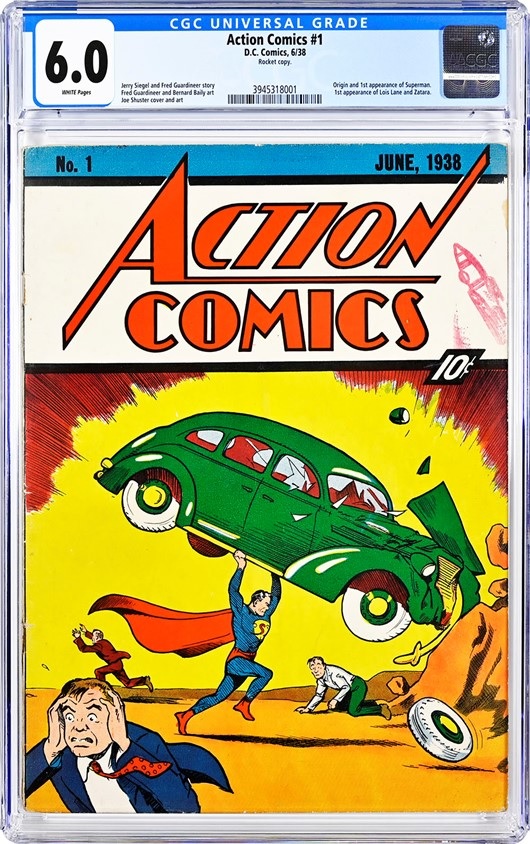 In 1938, creators Jerry Siegel and Joe Shuster introduced Superman in Action Comics #1, which served as a springboard for the Golden Age of comics. Imbued with extraordinary powers and an unwavering sense of right and wrong, the Man of Steel became a benchmark by which other heroes were measured. Nearly 85 years later, Superman is still among the most popular comic characters and his first appearance is the undisputed pinnacle of comic collecting.

The Rocket Copy of Action Comics #1 is recognized for the stamp of a red rocket on the cover. This same copy was sold by Heritage Auctions in January 2022 for $3.18 million. It is now the record holder for an Action Comics #1 sale, having surpassed ComicConnect’s brokered sale of a CGC 8.5 copy for $3.25 that was facilitated in April 2021.

Action Comics #1 is also the record holder for most sales over $1 million with eight sold in auctions and private sales. Of those eight, four of them were for over $3 million (the three mentioned above and a CGC 9.0 copy that sold for $3.2 million by Darren Adams on eBay in August 2014).

That total is more than all other $3 million (or more) comic sales combined. Only three other comics have sold for more than $3 million, including the Amazing Fantasy #15 CGC 9.6 that Heritage sold for $3.6 million in September 2021, Captain America Comics #1 CGC 9.4 San Francisco Pedigree that realized $3.1 million in Heritage’s April 2022 auction, and the current record holder for most valuable comic, Superman #1 CGC 8.0 Edgar Church (Mile High) Pedigree that was sold in a private sale for $5.3 million.