COVER STORY: The Brave and The Bold #31 (Cave Carson) 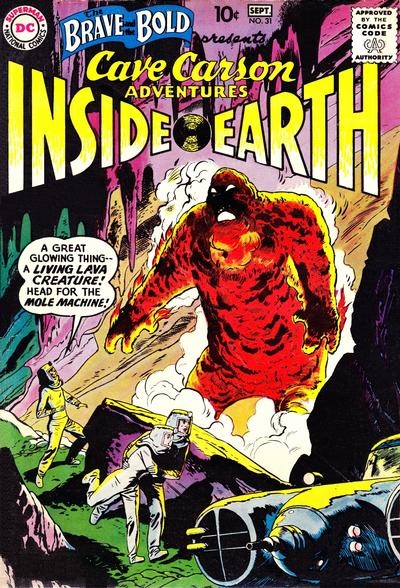 What makes the best comic book covers? It’s a great topic for debate. For us as individuals there is no wrong answer, of course. It’s purely subjective. But with a little thought it is frequently possible to explain what it is about a particular image that grabs you. The best ones are the ones that make you stop and check out something you weren’t previously going to purchase – and in some cases, you even end up picking up a title you’ve never even heard of before.

This week an old friend in the DC Universe joins the 21st century. Cave Carson debuted in The Brave and the Bold #31 (September 1960). The book was an exciting adventure feature with fast-paced, thrilling art by the always dependable Bruno Premiani. A solid character, Carson’s origin and heroic style didn’t exactly catch fire in a time when the Flash, Green Lantern, and Justice League of America were setting the standard for the quickly evolving Silver Age.

By 1960 the comic industry, specifically DC and their growing line of superheroes, was beginning to experience a rise in sales after over a decade in decline. Cave Carson was part of a series of adventure teams and characters that were inspired by the 1957 success of Jack Kirby’s Challengers of the Unknown. The success of Kirby’s team book based in sci-fi and adventure led to a brief spurt in team books with a similar theme.

However, in 1960, fans were clamoring for more space-age superheroes and Cave Carson’s roots went as far back as pulps. He and his team never received his own title as other creations of that period such as Rip Hunter, Time Master, and The Sea Devils did.

Today, writer and musician Gerard Way has brought this Silver Age classic into DC’s new Young Animal line of titles. His new, idiosyncratic and completely entertaining take on titles such as The Doom Patrol as well as his reimagining of Steve Ditko’s Shade, The Changing Man as Shade, The Changing Girl are appearing to solid acclaim.

Fans are certainly thrilled with his work as even promotional material created specifically for the roll out of the Young Animal line is getting surprising sales in auction.

The original Cave Carson was by no means a failure. Writer and co-creator France Herron worked with Premiani to create a solid, action-packed hero. The stories and art were closer to the classicism of the Lost Worlds of Edgar Rice Burroughs and the science fiction of Verne and Wells in a time when lightning hitting a cabinet of chemicals could give you super-speed and a dying alien could give you a ring that would, if Superman were trapped in the bottle city of Kandor or battling Brainiac out in space, make you the most powerful person on the planet.

Bruno Premiani’s name is seldom brought up with the same fervor and fanatical deference that fans and historians show Kirby, Gil Kane, Carmine Infantino, or Steve Ditko. The artist had started with DC in 1949 and then moved to a long run on the Tomahawk series.

He was a good collaborator who not only created Cave Carson with writer Herron but also brought another of Way’s Young Animal line into the DC Universe. His creation of the Doom Patrol with writer Arnold Drake is comic book legend.

Given the assignment on a Friday with a Tuesday deadline, he and Drake with an assist from Bob Haney brought a new team of dysfunctional heroes led by a man in a wheelchair into existence. At the same time, across town, a similar team known as the X-Men was also on the drawing boards for Marvel.

Premiani’s cover work for the appearances of Cave Carson is a packed, dense explosion of action and color. While Carson’s name may be in the title, it is the lava monster that stands front and center with Carson himself almost lost in the shadows as he stands in awe of what is before him.

The design and lettering in the creation of cover logo for a new character is always important. For Cave Carson, the lettering was done by Ira Schnapp. An even more obscure artist in the DC stable than Premiani, Schnapp is actually one of the most widely seen artists in DC’s history. For he is the one who designed logos for not only DC’s characters but book titles as well.

Anchored by Premiani’s mastery of design and anatomy, the cover is a reminder that no matter how high-flying the brand new modern concepts of the Flash and Green Lantern were, the Silver Age of comics still had one foot deep in the world of Edgar Rice Burroughs and pulps.