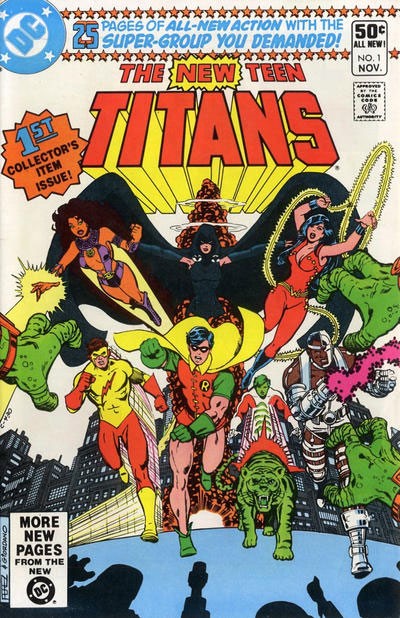 Review: Following a strong debut in DC Comics Presents #26, the new Teen Titans gather for good in this well-executed first issue. Writer Marv Wolfman packs a lot into this origin tale: back story, foreshadowing, solid action, and plenty of characterization – often in the form of parental angst. A former top editor for the competition, Wolfman brings something else essential to the Teen Titan’s mix: an infusion of Marvel style. Joined by fellow Marvel-expat George Pérez – who delivers dynamic-but-still-raw art here – the writer would soon have this series topping DC’s sales chart. Deservedly so.

Cool factor: DC finds its answer to Marvel’s X-Men – and the creative team to pull it off.

Creator quotable: “The Titans’ origins all stemmed from parent/child differences. The theme for the Titans began and remained young verses old. Son and daughter verses father and mother. These universal conflicts, understood by all teens as they grow up and separate from their parents, could be revisited time and time again.” –Writer/co-creater Marv Wolfman (From the Preface to The New Teen Titans Archives: Volume 1, November 1998)
Character quotable: “Sure, what have I got to lose – ? – that is, besides my life!”– Changeling, keeping it light

Copyright ©2016 Off the Wahl Productions, all rights reserved. Each week, T. Andrew Wahl takes a look at a Bronze Age Fantastic First. For more reviews like this one, check out Wahl’s website, SequentialReaction.com.