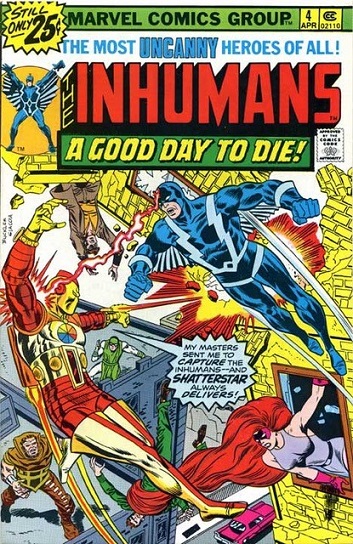 Title: “The Doom Called Shatterstar!”
Synopsis: The Inhumans battle Shatterstar in New York while a grimmer tale unfolds back in Attilan.

Review: Compared to today’s decompressed storytelling, it’s amazing just how much story could be crammed into a Bronze Age comic. The first third of this installment features a well-choreographed battle with Shatterstar; the second third reveals the origin of Shatterstar (which seems a bit much for such a minor character); and the final third builds to a strong cliffhanger ending. That’s a lot of story, all pretty well done. Vince Colletta is the latest of the revolving inkers; he’s got a reputation for overpowering pencilers, but George Pérez’s work holds up well.

Collector’s note: According to The Overstreet Comic Book Price Guide, there’s a 30¢ cover price variant of this issue.

Character quotable: “Wh-what … ? What could have … repelled a beam of such pure destruction … ?!” – Shatterstar

Copyright ©2018 Off the Wahl Productions, all rights reserved. Each week, T. Andrew Wahl offers up a Bronze Age Minute. For more, check out Wahl’s website, SequentialReaction.com.