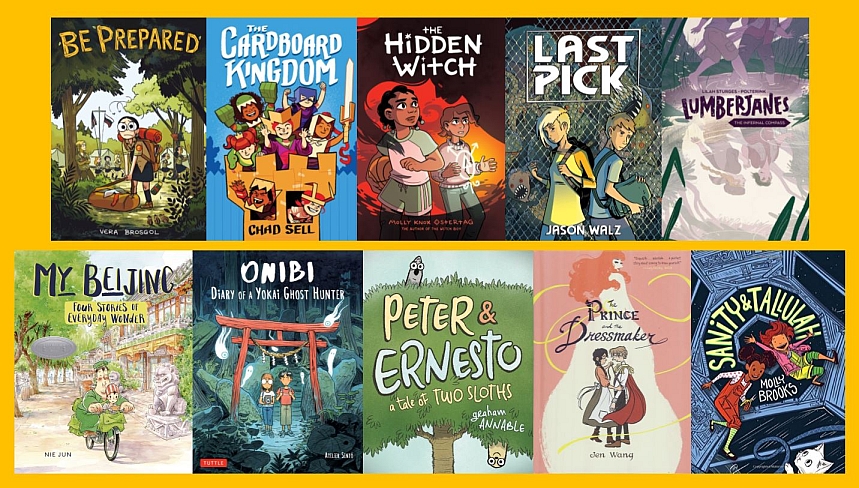 Kids Read Comics have announced the shortlist for the annual Dwayne McDuffie Award for Kids’ Comics, which will be handed out at the Ann Arbor Comic Arts Festival on June 14, 2019.

The award honors the pioneering comics and animation writer who cofounded Milestone Media and created the teen superhero Static among others. Judges seek out excellent comics aimed at school-aged children and young teens and score the work on four main criteria: quality, timelessness, originality, and diversity.

This year, the judges for the Dwayne McDuffie Award for Kids’ Comics are Faith Roncoroni, a high school English teacher and comics and anime club adviser; Tameshja Brooks, who works at Green Brain Comics; and Nola Pfau, managing editor for Women Write About Comics. They have been assisted by Edith Donnell, a Kids Read Comics cofounder and youth and teen librarian.

After reviewing scores of books published in 2018, the judges narrowed the field to a list of ten that showcase today’s amazing variety of comics for young readers: books that cover a wide range of topics from many viewpoints and in distinct voices.

On this year’s shortlist are:

Be Prepared, by Vera Brosgol, sends young Vera, a Russian girl living in an American suburb, to summer camp – Russian summer camp, the only one her single mom can afford and the one where she just might be able to fit in.

The Cardboard Kingdom, by Chad Sell, follows a neighborhood of kids who transform ordinary cardboard into fantastical homemade costumes as they explore conflicts with friends, family, and their own identity.

Hidden Witch, by Molly Knox Ostertag, continues the story of Asler, hero of The Witch Boy, as he takes magic lessons from his grandmother and tries to help his non-magical friend Charlie escape from a curse that’s trying to attach itself to her.

Last Pick, by Jason Walz, takes readers to an earth overrun by alien invaders, where only those too young, too old, or too “disabled” have been spared from abduction...but maybe the kids last picked can step up and start a revolution.

Lumberjanes: The Infernal Compass, by Lilah Sturges and polterink, finds the Janes separated during an orienteering outing, thanks to a mysterious compass that others very much want to lay their hands on.

My Beijing: Four Stories of Everyday Wonder, by Nie Jun, introduces Yu’er and her grandpa, who live in a small neighborhood in Beijing that’s full of big personalities – with a story around every corner and a hint of magic each day.

Onibi: Diary of a Yokai Ghost Hunter, by Atelier Sento, transports readers to the places where natural and supernatural meet, as it explores some of the lesser known parts of Japan in a story that is part fantasy and part travelogue.

Peter & Ernesto: A Tale of Two Sloths, by Graham Annable, tells the story of two best friends who are nothing alike – Peter loves their tree and never wants to leave, while Ernesto loves the sky and wants to see it from every place on earth.

The Prince and the Dressmaker, by Jen Wang, finds Prince Sebastian hiding a secret life – taking Paris by storm wearing fabulous dresses as the Lady Crystallia – and relying on the brilliant young dressmaker Frances, who guards his secret but has dreams of her own.

Sanity & Tallulah, by Molly Brooks, features best friends who live on a dilapidated space station at the end of the galaxy – but when Sanity creates a definitely-illegal-but-impossibly-cute three-headed kitten, the havoc it wreaks may mean the end of their outer space home.

The full list of books considered for the award can be found on a2caf.com. Nominations for 2019 titles can be made through January 31, 2020, by emailing mcduffiekidsaward@gmail.com.