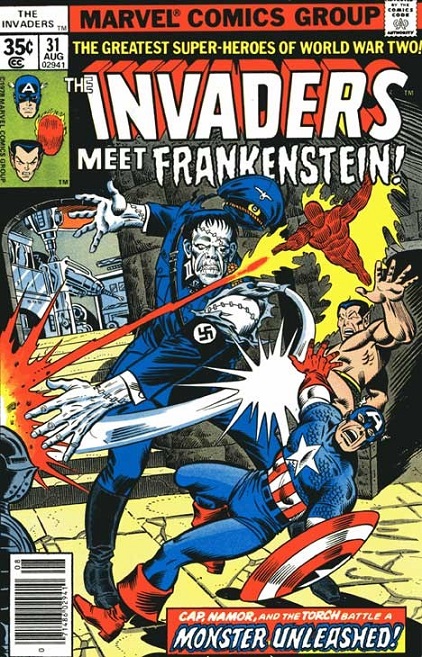 Title: “Heil Frankenstein!”
Synopsis: When the Human Torch and Toro disappear in Switzerland, the Invaders’ investigation brings them face to fist with Frankenstein.

Review: You can’t go too wrong with a story featuring a Nazi Frankenstein, but it also proves to be a hard story to do right. Don Glut makes some interesting storytelling choices, not all of which pay off. This story is told in flashback, sapping drama from scenes where the heroes are supposedly in mortal peril. Glut also hints at the similarities between the Human Torch and Frankenstein – two artificial men – but fails to develop the theme fully; it leaves the reader hungry for something more. On art, Chic Stone’s style fits the book fine, but his work here is inconsistent.

Notable: This isn’t the same Frankenstein monster that starred in his Marvel series during the Bronze Age.