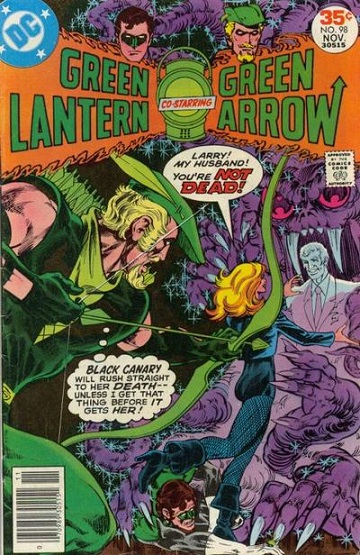 Title: “Listen to the Mocking Bird!”
Synopsis: Green Lantern and company tangle with Ffa’rzz, a malignant alien who teases its prey with their heart’s desire.

Review: This series continues to feature strong art, with Mike Grell’s pencils holding up surprisingly well under Vince Colletta’s inking. But the story this time out, by the usually reliable Denny O’Neil, is plagued by plot holes, poor pacing and awkward explanatory dialogue; these problems aren’t uncommon in Bronze Age books, but they’re really glaring here. The story also does a poor job bringing new readers up to speed: It’s never really explained why Green Lantern has some alien-flower creature on his shoulder, or why Katma Tui is walking around in a daze. All in all, a disappointing read.

Cool factor: Mike Grell’s art. He’s not Neal Adams, but he might be the next best thing for this book.
Not-so-cool factor: With his beloved Black Canary under the alien’s thrall, Green Arrow decides the only solution is … to punch her in the face!

Copyright ©2017 Off the Wahl Productions, all rights reserved. Each week, T. Andrew Wahl offers up a Bronze Age Minute. For more, check out Wahl’s website, SequentialReaction.com.