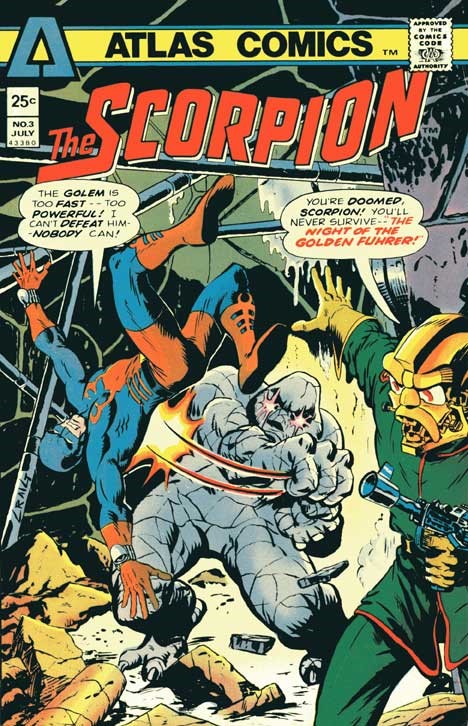 Review: The youngsters weren’t yet proclaiming “WTF?” back in the 1970s, or this issue surely would have garnered that reaction from little me. After two stylish, pulp-infused outings by Howard Chaykin, Atlas throws out the baby with the bathwater with this generic superhero reboot. Gabriel Levy’s script is full of logic flaws and plot holes, which isn’t surprising from a story built around “an atomic powered sewage-to-energy converter.” Jim Craig’s art would look right at home on any B-list Marvel title, but it’s a huge step down from Chaykin’s sophisticated storytelling.

Cool factor: For all its flaws – and the obvious letdown from the Chaykin issues – this issue just screams “’70s Superhero Comic!” (Sad confession: little me probably would have actually preferred this one to the Chaykin issues. Like I said: sad.)
Not-so-cool factor: Atlas already had one Spider-Man knockoff (see The Destructor). Did it really need another?

Character quotable: “Sorry! Never could get along with reporters!” – The Scorpion, whose new secret identity is a newspaper publisher

A word from the artist: “I guess the books weren’t selling or something, and they wanted to start doing the Pepsi version of Coke, you know, they wanted to have the same kind of characters as Marvel.” – Jim Craig, on why the Scorpion was revamped into a Spider-Man knockoff, in an interview in Comic Book Artist #16 (December 2001)

Copyright ©2020 Off the Wahl Productions, all rights reserved. Each week, T. Andrew Wahl offers up a Bronze Age Minute. For more, check out Wahl’s website, SequentialReaction.com.