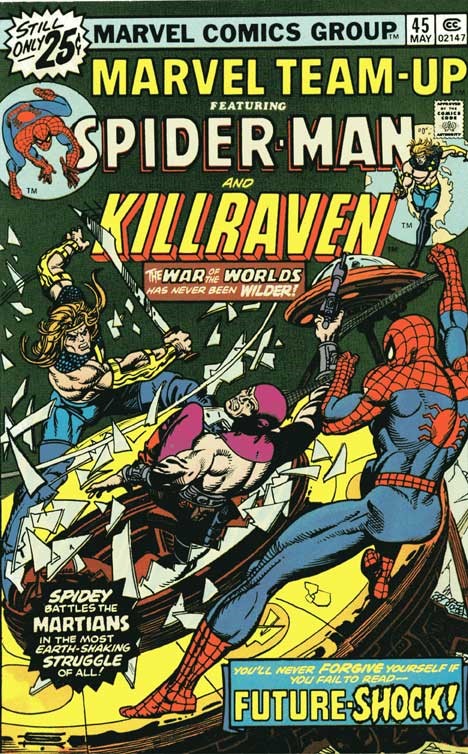 Title: “Future-Shock!”
Synopsis: On his way back from the past, Spider-Man somehow gets sidetracked to 2019 – and the Martian-controlled world of Killraven!

Review: Bill Mantlo’s time-traveling epic continues, taking Spidey from the Salem witch hunts of 1692 and throwing him into the then-future of 2019 for a team-up with Killraven. Unlike the complex four-parter that preceded it, this issue is a done in one that just scratches the surface of Killraven’s world. It would have been fun to spend more time in this rich, dystopian future, but even this brief visit is fun. Mantlo remains an underrated comics craftsman, both in terms of plot and prose. (One quibble this time out: Why isn’t Spider-Man bothered by Killraven hacking other humans to death with his sword?)

Cool factor: Spidey’s journey through time on page 3 is well written and well drawn (though a consistent nine-panel grid would have looked even better).
Not-so-cool factor: Again, Spider-Man just standing by while Killraven slices and dices; that’s really out of character for Spidey.

Notable: There’s a LOC on the “Mail It to Team-Up” page from future Eclipse publisher Dean Mullaney singing the praises of Marvel Team-Up #41.

Character quotable: “I mourn a lost past, you a shattered future, neither of us really knowing if one relates to the other.” – Killraven, warrior and philosopher

Copyright ©2020 Off the Wahl Productions, all rights reserved. Each week, T. Andrew Wahl offers up a Bronze Age Minute. For more, check out Wahl’s website, SequentialReaction.com.