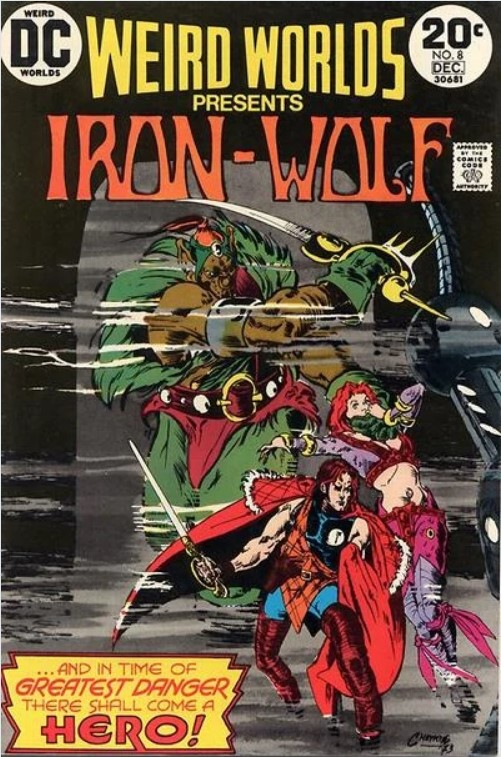 Cody Starbuck. Gideon Faust. Reuben Flagg. Maxim Glory. Howard Chaykin is known for creating colorful lead characters, each a hero’s hero. But it all started way back in 1973 with the spectacular debut of his space pirate for right, Lord Brian Ironwolf.

Combining his varied interests and genres, Chaykin’s grand premiere of Ironwolf (or Iron-Wolf, as it was spelled at the time) within the pages of DC Comics’ Weird Worlds #8 introduced unsuspecting readers to corrupt galactic empires, fraternal feuds, wooden starships (The Limerick Rake), and space vampires. And that was just for starters! One must also consider the dynamic, atmospheric cover with its pulp reimaginings that served the comic well. On the four-color frontispiece stands the great Lord Ironwolf at the ready, alongside his faithful female companion, Shebaba O’Neal, as she gets pulled back suddenly by a brutish barbarian warrior of the Empire Galaktika. The barbarian, with sword in hand, seems to want to take Shebaba’s beautiful head – and the Lord Ironwolf’s life!

Besides sporting an early cover by now comics veteran Chaykin, the cover also features a comic book logo created by none other than the man behind the legendary run of Marvel Comics’ The Mighty Thor, among other projects, Walter Simonson. The logo stands out as both stylish and a little threatening – warning the reader of what lies within.

A must-have addition to any Chaykin collection, this early work is still affordable – although a bit of a challenge to track down in better condition. You see, people used to read their comics back in the day, and this book was not only well-considered by fans, but also often read and read again.