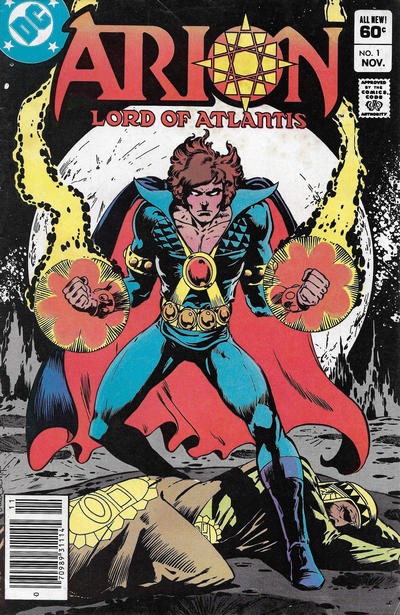 Review: As debut issues go, Arion is a mess. Is there an interesting fantasy saga here? Maybe. But we join the story in medias res and it proves almost impossible for the new reader to get up to speed – or to care. We’ve got a pre-disaster Atlantis, powerful mages, cosmic battles and far-off gods – and little understanding of how these things relate. Arion started life as a backup in DC’s Warlord; readers familiar with these earlier stories might understand what’s happening. The new reader has no clue. Jan Duursema’s art is solid, but not nearly enough to redeem this false start.

Cool factor: Seriously, there might be something cool here. But the storytelling here doesn’t offer much of an invitation to find it.
Not-so-cool factor: The supreme mage of his time under the tutelage of the “ancient one.” Hmm. That sounds mighty familiar.

Notable: Also includes an essay by writer and co-creator Paul Kupperberg about the origin of Arion. … According to Kupperberg’s essay, earlier names considered for Arion included Murray and Altan.

Collector’s note: According to the Grand Comics Database, the is a 75¢ Canadian variant of this issue.

Character quotable: “Uhhhnnn … it … it hurts … gods help me … it hurts!” – Arion, who spends most of his debut wounded, helpless or both

Copyright ©2021 Off the Wahl Productions, all rights reserved. Each week, T. Andrew Wahl offers up a Bronze Age Minute. For more, check out Wahl’s website, offthewahl.com.