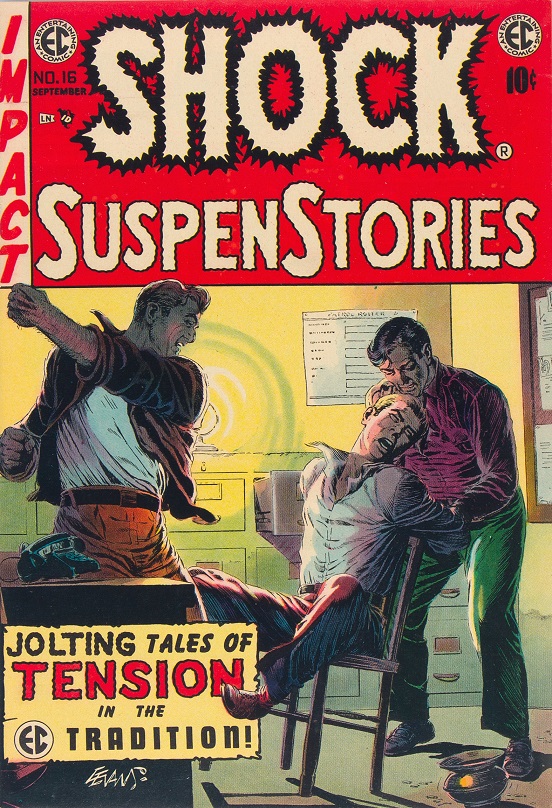 Ask Alan Moore or Rick Veitch or Frank Miller or comics historians the world over and they will tell you the 1950s almost murdered our heroes – especially those of the “super” variety. The now-celebrated, then-infamous EC Comics had won the imaginations of Cold War American kids, and crime and horror were the norm on the newsstands. Needless to say – with EC’s winning mixture of the spectacular, unequaled sophistication, and sheer shock – violence and vice were number one with a bullet.

With that said, and in a time before the Comics Code, we have the striking – though very disturbing – cover for Shock SuspenStories #16. Offering readers of all ages “Jolting Tales of Tension in the EC Tradition,” this killer cover by comics master George Evans finds a poor schlep getting the beating of his life by an undercover cop and his partner, two thugs, or in the crime noir tradition of Mickey Spillaine and James Ellroy, both? This must-have, much-reprinted comic offers the same kind of machismo that one may find from reading Spillaine’s I, The Jury or Ellroy’s White Jazz. Evans’ no holds barred frontipiece is spot on titillation of the torturous kind, and it grabbed the rapid psyches of a tabloid-hungry, post-war gestalt.

Countless collectors have targeted this book because of its cover over the many years. And those who own it have won themselves quite a four-color prize.