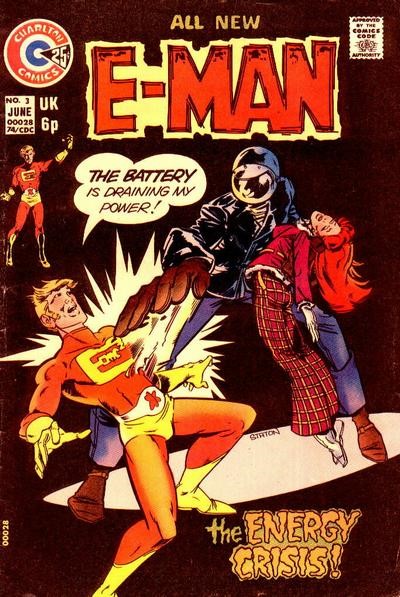 Review: While not as strong as the previous two issues, this third outing for Charlton’s energy superhero is still quite fun. Nicola Cuti’s story has a contemporary edge but suffers from plot holes and pacing issues. The cartoony art, by Joe Staton, remains solid.

Review: Despite all that happens, this backup story is completely devoid of emotional stakes. The Wally Wood-inspired art is serviceable but flat.

Grade (for the entire issue): B-

Cool factor: While a step down for earlier issues, E-Man remains unlike any other comic from its era.

Notable: First appearance of Michael Mauser. … According to Joe Staton, in an interview in Back Issue #13, 2005, the six-issue gap between E-Man #2 and #3 was due to a paper shortage due to strikes at Canadian paper mills.

Collector’s note: According to the Grand Comics Database, there is a Modern reprint of this issue from 1978.

Character quotable: “So long as you’re paying me, I’ll believe anything.” – Michael Mauser, P.I., with more honesty than integrity