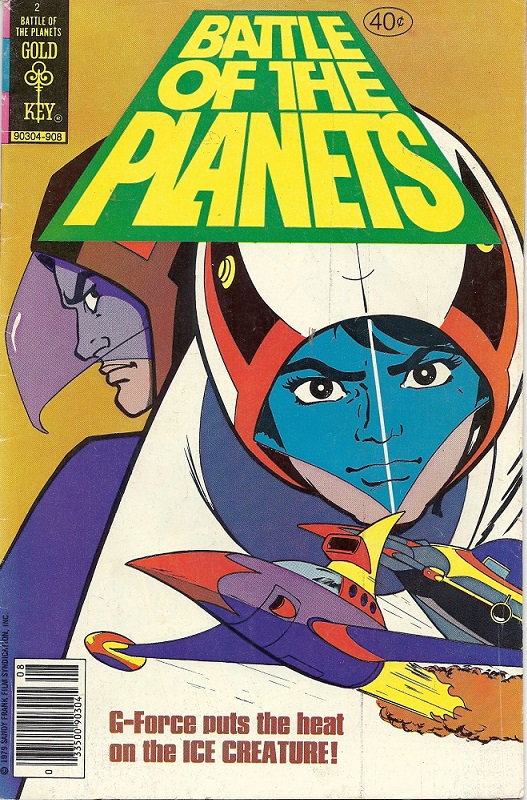 In the late 1970s, Gold Key titles were on newsstands everywhere – and their parent company Western Publishing was in almost everything pop. But there was something that this one time entertainment powerhouse could not have foreseen – the incredible popularity of George Lucas’ Star Wars. Still, with its own history of publishing science fiction themed comics, that didn’t stop the popular comic book publisher from wanting to capitalize on Lucas’ success.

Enter Sandy Frank Productions and its licensing of a fan-favorite anime and mange series, Gatchaman, from Japanese-based Tatsunoko Productions. Renaming the property Battle of the Planets in a not so sly nod to Lucas’ blockbuster film, Sandy Frank Productions hoped that the tremendous power of The Force – and its mass commercial appeal – conjured for them supernatural sales, too.

With the addition of the R2-D2-looking droid (and complete Sandy Frank creation) 7 - Zark – 7 joining the cast, “G-Force,” as the Gatchaman team was now known to American audiences, fought the good fight against the mad villain (and surprising evil crossdresser) Zoltar. Their battles with the cosmic criminal element won a loyal fanbase that spanned generations of Westerners.

Sure, with fans today and their Transformers and Saban’s Mighty Morphin’ Power Rangers, one would think a comic book with Japanese-born properties and products would lead into instant sales success. But this was 1979, and the idea of profiting from characters grown in the Far East was a little preposterous at the time – even though these heroes were colossal in their homeland of the Rising Sun. That is, until you saw the cover for Battle of the Planets #2, and you immediately bought what Gold Key and Sandy Frank was selling. Hook, line, and sinker.

Featuring the super-group’s team leader Mark (the Eagle) and his roguish second, Jason (the Condor), on the cover – along with the ultra-cool transforming starship God-Phoenix – just the expressions on their faces saw their relationship mirroring that of Luke Skywalker and Han Solo. Whether by coincidence or creation, the two Alpha Males’ complex relationship helped move the action forward while bringing fans from across the planet to pick up the next issue.

And it’s for that reason, among others, why you should strongly consider this cover and the comic that comes along with it. Because over the decades, G-Force has proven itself focusing on the long play...and this four-color team plays to win!