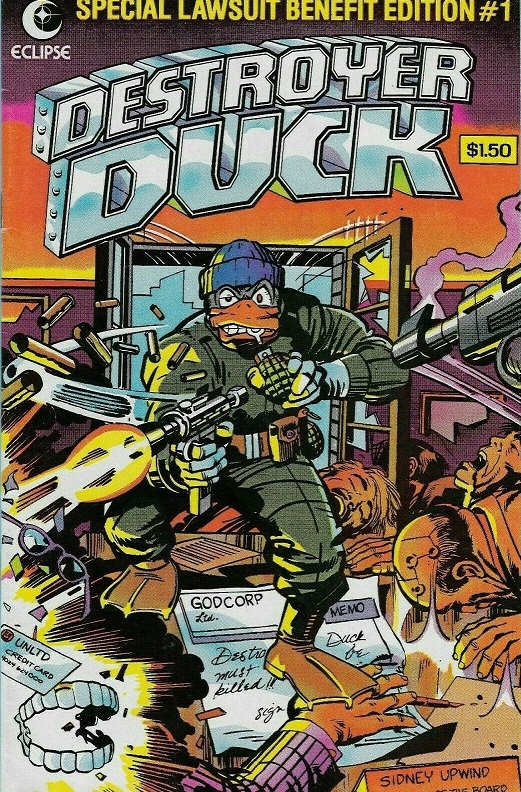 In his editorial within the pages of Topps Comics’ Victory #1, former Topps Assistant Editor Charles Novinskie called comic book royalty Jack Kirby “a drawing/thinking machine.” The comics pro went on to write, “Few people can imagine the scope of [Kirby’s] genius without seeing the number of characters he has created that have yet to see the light of day.”

And then there are those characters appearing on the four-color page that he co-created and/or dreamed up from whole cloth. Evidence of this can be found in Kirby and extraordinarily talented writer and Howard the Duck creator Steve Gerber’s Destroyer Duck for Eclipse Comics.

“I was lucky enough to interview Jack for PREVIEWS . . . and he was a real sweetheart,” said Diamond Comic Distributors’ PREVIEWS Manager Marty Grosser. “We would have Jack ‘King’ Kirby among us for another year, dying on February 6, 1994. During his 77 years on Earth, Jack was a prolific idea man, and came up with amazing characters and scenarios that we’re all the worse for never seeing brought to life by his god-like hands of cosmic comics creation.”

In Image Comics’ The Savage Dragon/Destroyer Duck #1, a crossover to end all crossovers that carried a cover date of November 1996, Gerber chronicled in his “Fowl Play” essay found in the back of this comic that as of 1978, the legendary comics scribe had parted company with Marvel. He thought he owned his creation and accompanying characters in Howard the Duck. Marvel disputed this point. Litigation followed. To help finance his lawsuit against the publisher, he decided on creating a comic book to bring in some cash and fast. That comic book was Destroyer Duck #1.

With the banner “Special Lawsuit Benefit Edition #1” emblazoned on the top of the book’s cover, Kirby stayed true to the revolutionary spirit of what became his and Gerber’s call for creator ownership. With a big gun blazing, and executives going down by the dozens, Duke “Destroyer” Duck showed the world that creators like these two respected men were angry at how comic book creators were then treated and were not going to take it anymore.

Fans – and Marvel Comics – eventually listened. Details behind Gerber’s settlement with the comic book giant stay secret to this day, but without the late writer’s disagreement with Marvel, there would never have been a cover – and a comic – as in-your-face as this one by the “King of Comics.”

The cover and the comic are both royal treasures indeed.