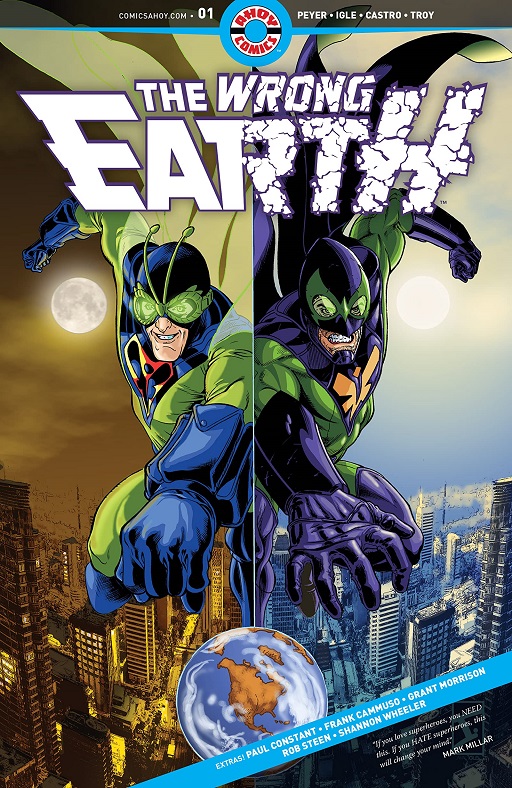 You heard it all before: It is not a hoax or an imaginary story. And, it involves one costumed crimefighter from a sunnier Earth than ours, as well as a darker knight from a grim and gritty version of our world. Now, in this very issue, see them fighting crime their own individual ways in each other’s worlds as Dragonflyman and The Dragonfly, respectively, in AHOY Comics’ The Wrong Earth #1.

Featuring a beautifully detailed cover by Jamal Yaseem Igle (also known as the co-creator of The Wrong Earth and the amazing illustrator of Black Mask Studios’ unforgettable Black), this first chapter of what will become a four-color classic juxtaposes the two comic book heroes – one a masked marauder of mirth while the other a vengeance-driven vigilante – as they use their respective fighting techniques to banish crime in each other’s versions of the comic book burg, Fortune City. Igle’s cover art dances upon the page, offering reminisces of the great George Pérez during his storied tenure on DC Comics’ The New Teen Titans. It’s that spectacular!

There’s a lot to love about what’s within this book, too. Joining Igle’s extraordinary art is the writing of Tom Peyer, whose stellar work reminds one of his incredible explorations of super-heroics in DC Comics’ Hourman. Together, these two creators are a comic book dream team for the ages.

Although available at finer comic book shops, The Wrong Earth #1 is still a hard book to find. It’s also a can’t-miss first chapter in a series that has captured the imagination of readers worldwide. One looking for an action-packed, genre-bending superhero comic – and an accompanying epic cover – should search it out!