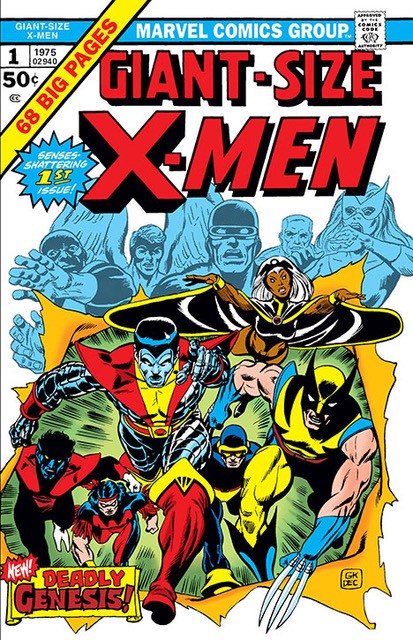 Review: The new X-Men’s initial outing is an incredibly efficient affair, particularly when compared to modern, decompressed storytelling. Len Wein and Dave Cockrum introduce several new mutants, establishing powers, personalities and a glimpse of backstory. Wein’s plot is tight and Cockrum’s art a cut above. This is a well-crafted debut.

Title: “Call Him … Cyclops”
Synopsis: The X-Men’s longtime leader demonstrates the range of his powers across a variety of situations.

Review: This reprint from X-Men #43 lacks the punch and pizzazz of the vastly superior lead story. It’s informational, not entertaining.

Title: “I, the Iceman”
Synopsis: The youngest of the original X-Men shows off how his powers have evolved since his early “snowman” days.

Review: With its jovial, break the fourth wall style, this short reprint from X-Men #47 is a relic from another era.

Title: “The Female of the Species!”
Synopsis: It’s Marvel Girl’s turn to showcase her powers – including, sadly, the ability to “turn men’s heads.”

Review: Even with a writer of “the supposedly weaker sex,” this partial reprint from X-Men #57 concludes on a sexist note.

Grade (for the entire issue): B+

Second opinion: “The new X-Men were a fresh outlook in comics.” – Michal Jacot, Comic Effect #28 (Winter 2001) … “I feel this book represented some of Len Wein’s weakest writing and some of Dave Cockrum’s weakest art.” – Mike Hall, Comic Effect #35 (June-July 2003) …“Len Wein holds a makeover clinic in Giant-Size X-Men #1, showing how to put a new face on an old concept.” – Jim Johnson, The Comics Buyer’s Guide to the X-Men (Comics Buyer’s Guide Presents (2003)) … “Some commentators see the release of this issue as the true start of the Bronze Age of comics – an era-defining moment.” – Melanie Scott and Stephen “Win” Wiacek, “Marvel Greatest Comics: 100 Comics That Built a Universe” … “The new team added a multiracial, multinational tilt to remind us even more that, at its core, X-Men has always been about intolerance to those who are different.” – The Slings & Arrows Comic Guide (second edition, 2003)

Cool factor: It’s amazing how much of the X-Men template that would dominate comics for the next few decades was already in place here. Also, Dave Cockrum’s costume designs; they’re almost always cool.
Not-so-cool factor: The handling of Thunderbird, a Native American character, has not aged well.

Collector’s note: This comic has been reprinted several times, including a facsimile edition (with a different cover price) in 2019.

Character quotable: “What are we going to DO with THIRTEEN X-Men?” – Angel, one of the original X-Men