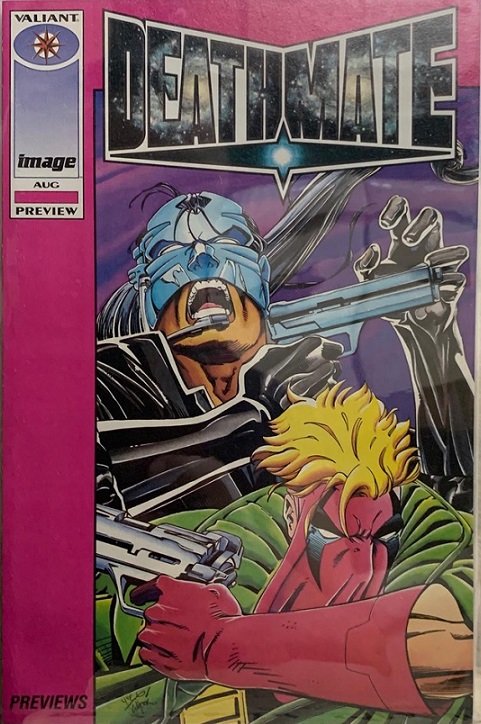 Valiant and Image Comics’ Deathmate event symbolized both the height and the fall of comic books in the 1990s. It mirrored the glam and near-hysteria of the comics boom, and (as unlikely as it was) did its part to help determine the specialty market’s shocking downfall in that same decade. But, when scrutinizing Deathmate – as a story, as art, as a marketing phenomenon – we must go back to the very beginning.

The Advance Comics preview for the late Capital City Distributors and Comic Defense System (dated July 1993) not only officially launched the much-anticipated Deathmate crossover, but exploded in comics stores. Within five four-color pages by then Valiant Editor in Chief, Bob Layton and his protégé, artist Bernard Chang, Western Publishing’s Solar and Extreme’s Prophet halted Valiant’s Unity saga before it began, in one fell swoop, while simultaneously thwarting the mad Mothergod. Afterwards, though, Prophet sensed something dark on the horizon – something more terrible.

That same month, over at Diamond Comic Distributors’ Previews catalog (though dated August 1993), another Deathmate preview teamed Valiant’s mysterious Shadowman and Wildstorm’s resident cold warrior, Grifter as they track a serial killer – aka the Harbinger (i.e., mutant) named Obadiah Archer (of the unlikely comic book partnership, Archer & Armstrong). In the reality of Deathmate, Archer is targeting religious figures all over the country – and it’s up to Shadowman and Grifter to take him down. However, with one spray of machine gun fire by Archer’s hand, it is the Shadowman who falls.

With these two previews, the table was set and a darker comic book universe was about to be served to fans. Let the four-color feast begin.

And because of the covers of these two must-have chapters in a crossover not to miss, it did – to great effect.