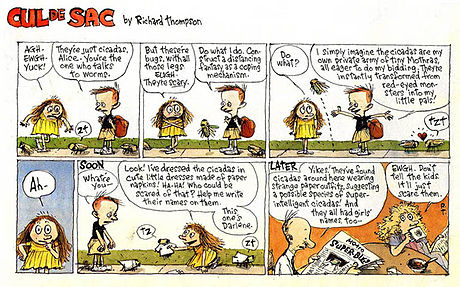 Richard Thompson was the celebrated creator of Cul de Sac, the Reuben Award winning comic strip that was introduced to The Washington Post in 2004. It has since been syndicated by Universal Press Syndicate/Universal Uclick.

The pen and ink strip takes place in a suburban setting inspired by his own childhood in Montgomery County, Maryland. The wry story followed 4-year-old Alice Otterlop, her older brother Petey and parents, plus friends and classmates. It debuted in February 2004 as a valentine to natives around Washington, DC who do not work within the government.

He also drew the weekly Richard’s Poor Almanac in the Style section of The Post. He won the National Cartoonist Society Reuben Award in 2011 and a year later a charity named for his comic published Team Cul de Sac: Cartoonists Draw the Line at Parkinson’s art book.