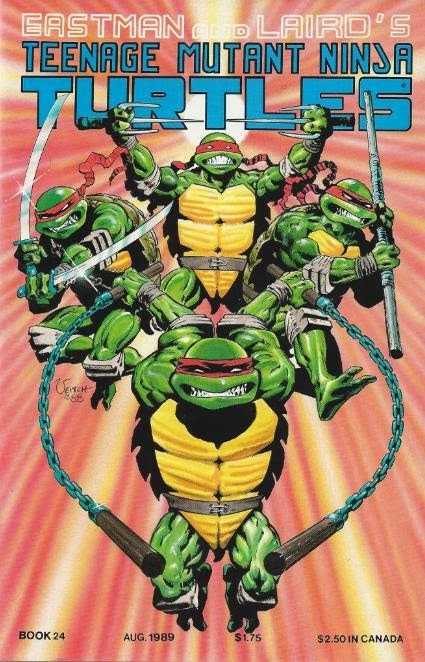 Award-winning creator Rick Veitch is known for his brilliant work on DC Comics’ groundbreaking Swamp Thing, Image Comics’ landmark 1963 event, as well as his own “King Hell Heroica.” But what many readers don’t know is that Veitch also had a fan-favorite run on the first, phenomenally popular Teenage Mutant Ninja Turtles (TMNT) series for Mirage Studios, including the now classic TMNT #24.

“In the late 1980s, I was writing and drawing Swamp Thing for DC,” Veitch said. “I knew Kevin Eastman and Peter Laird (who lived nearby), and they were advocating for self-publishing. They offered me a Turtles gig with their ‘self-publisher’ deal: a low, up-front page rate with a 50/50 split on the back-end.”

Eastman and Laird’s TMNT was a parody of four popular comics being published during its inception (Dave Sim’s Cerebus, DC Comics’ New Teen Titans, as well as Marvel’s Daredevil and Uncanny X-Men), and found an instant fan following with its 1984 debut. The first issue also enjoyed a number of printings, with the rest of the series being scooped up by readers and collectors alike. Today, the millions-selling property has spawned a wealth of IDW-published comics and collections, toys, TV shows, and movies that break records and bring in new fans.

“When Swamp Thing #88 blew up in my face, I accepted the [self-publisher] offer and started on a three-part TMNT story – ‘The River’ (TMNT #24-26),” Veitch said. “I began writing, pencilling, inking, and toning for $75 a page, which halfway through the project they raised to $100. This was about a third of my DC rate, which also offered back-end royalties.”

Although his celebrated three-part story, “The River” (including “Down to the River,” “River Hymn,” and “Old Man River”) is no longer considered canon by Laird because it had no direct Mirage staff involvement in the writing, some of the events of the story (most notably the villainous Bloodsucker causing Raphael’s retro-mutation) are referenced in a canon issue: “Sons of the Silent Age” (TMNT #28).

“The deal worked pretty good at the beginning with me getting 50% of the collected edition and some merchandising stuff,” Veitch said. “I went on to do another single issue of Turtles (#30 ‘Sky Highway’) and a two-issue Casey Jones miniseries, which I wrote and penciled. In all, I completed almost 200 pages of TMNT material.”

That makes a cover story to remember.