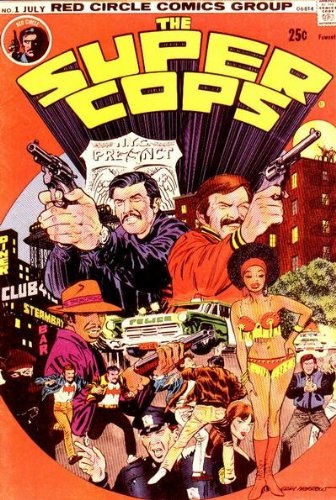 Few would disagree that the 1970s were a good time in the career of Gray Morrow. Besides his vast comic work and fantasy novel cover illustrations, he also earned the right to pay homage to the great pulp heroes of yesteryear, Tarzan and Doc Savage, via his cover art for Philip Jose Farmer’s Del-Rey epics: The Lord of the Trees and The Mad Goblin, respectively. But it was also his work on Archie Publications’ Black Hood and the loose comic book adaptation of the ‘70s funny book-like crime film, Super Cops (directed by none other than Shaft creator and Renaissance man Gordon Parks), that eventually transported Morrow into the zeitgeist of the “Me Decade.”

Spotlighting the crime-busting adventures of David Greenberg and Robert Hantz, the unorthodox police duo whom The New York Times’ Vincent Canby referred to “(and) not always fondly, as Batman and Robin,” in his review for the much-regarded paper. Running one hour and 33 minutes in length, the R-rated film translated in the minds of Archie’s powers that be at the time as a good fit for their more mature and action-oriented Red Circle line.

Morrow took advantage of the almost adult-minded comic line and its liberalism in subject matter by creating a cover full of cops and capers, as well as colorful pimps and prostitutes. It also featured the main characters of Greenberg and Hantz flashing firearms and Batman t-shirts, a combination that might have made National Periodicals (now DC Comics) cringe at the time.

Although not as rare as you would think, this must-have masterpiece full of unsupported stereotypes and other ‘70s jive is something that readers should no less discover for themselves. If not for its outrageousness, for the wonderful Morrow art!