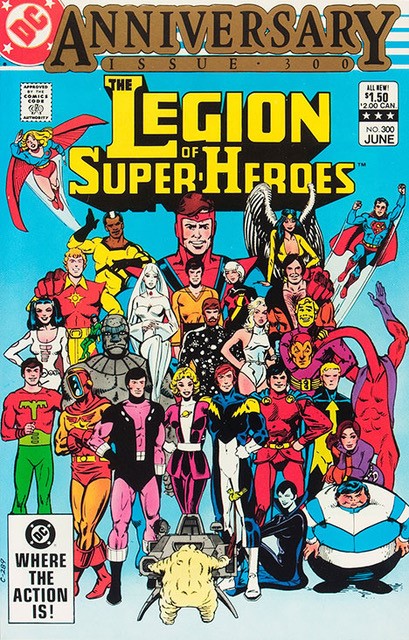 Title: “The Future Is Forever!”
Synopsis: As the Legion prepares for a celebration, Brainiac 5 seeks to cure an ally trapped by visions of alternate futures.

Review: DC put together some exceptional anniversary issues in the 1980s. This one is good, but doesn’t score a top grade. Paul Levitz’s framing sequence is solid, but none of the individual chapters – which feature alternate futures – truly stand out. The lineup up of guest artists also doesn’t thrill. The problem is so many of the previous The Legion of Super-Heroes artists’ styles tended to the bland side and never really fit the team’s futuristic milieu. Even the chapter by Dave Cockrum – arguably one of the best The Legion of Super-Heroes artists – pales in comparison to the current Keith Giffen/Larry Mahlstedt team. Fun, but not spectacular.

Cool factor: It was fun seeing previous Legion artists …
Not-so-cool factor: … but where was Mike Grell?