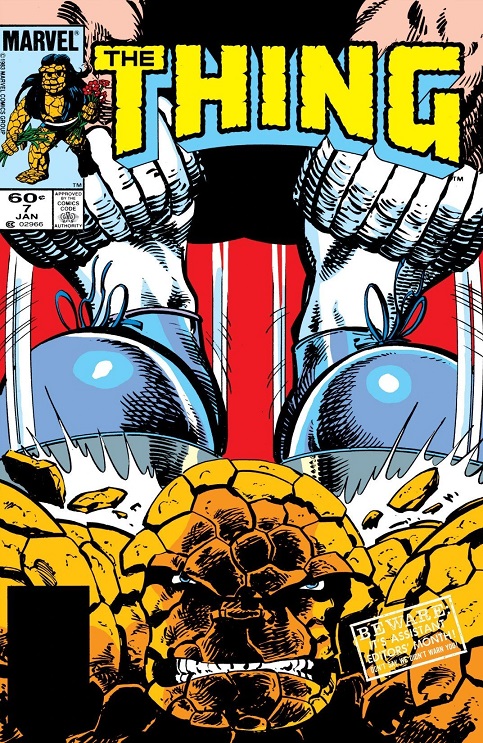 In 1983, Marvel brought all of its senior editors out west to what was then called the San Diego Comic Con, leaving the assistant editors behind to mind the famous Bullpen in their absence. With this tremendous shift what did the powers that be at Marvel do? Simple: They ended up making a gag month out of it – as well as creating arguably one of the finest comic book promotions of all time.

The idea behind “Assistant Editors’ Month” was that these overworked and underpaid employees, nearly giddy with their newly gifted editorial powers, apparently went crazy, causing things that would usually never happen in a regular book come to pass in the majority of the cover-dated January 1984 titles. This involved anything from “firing” a book’s current creators to crafting half-crazed stories to having the Marvel heroes interact with the editorial staff via one page “behind the scenes” strips.

One such example of this nigh-unforgettable publishing ploy was found with The Thing #7, which featured Yancy Street’s most famous son coming face-to-face with the highly villainous (and incredibly silly) Goody Two-Shoes. Sporting a wonderful cover by the title’s writer John Byrne, the showdown chronicled concludes with the ever-lovin’ blue-eyed Ben Grimm – surprise! – as the victor. In a back-up feature, again by Byrne, the hero reads his own comic and – not impressed – pays a visit to the Marvel offices to show his displeasure as only he knows how.