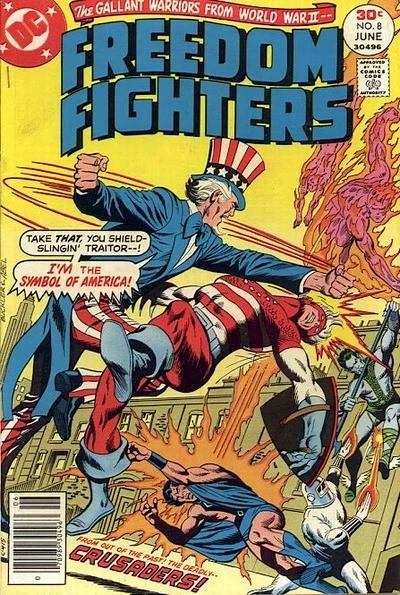 In the mid-20th century, comic book publisher National Periodicals (now DC Comics) invested in its future by acquiring from the past when it purchased the copyrights and concepts from “Lost Universes” like Charlton Comics, Fawcett Comics, and Quality Comics, just to name a few.

Additionally, in the 1970s, the Original Universe took a selection of Quality’s fan-favorite heroes from times past – Uncle Sam, Black Condor, Phantom Lady, Doll Man, and the Human Bomb – and placed them in their own parallel world of Earth X (an alternate earth where the Nazis won World War II) as their battleground.

Writer Bob Rozakis went even further into creating an alternative teaming of Timely Comics’ Captain America and Bucky, Human Torch and Toro, and the Sub-Mariner as the villains featured in Freedom Fighters #8 (May-June 1977). No . . . if you are thinking this alternate Timely team were referred to as Marvel’s the Invaders, then you are dead wrong. Instead, the Americommando and Rusty, Fireball and Sparky, and the Barracuda made up the deadly Crusaders! Emphasis on deadly!

This unofficial company crossover continued into the ninth issue starring “The Gallant Warriors from World War II.” And as popular a concept as it was, it is today a must-have collectible for fans of both Marvel and DC, as well as their Golden Age counterparts. They were heroes all – and offer profits aplenty to the savvy collector.