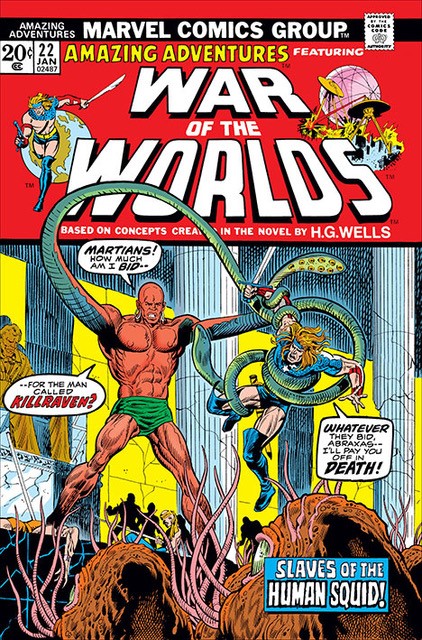 Title: “Washington Nightmare”
Synopsis: Killraven and his Freemen head to Washington, DC, where they encounter mutants, slavers and a new ally.

Review: A third inker in three issues reveals how much impact inking can have on Herb Trimpe’s pencils, with Frank Chiaramonte bringing the art back up to serviceable. Story wise, the slave auction at the Lincoln Memorial has power but lacks subtlety.

Title: “The Man Who Went Too Far!”
Synopsis: An obsessed scientist searching for extraterrestrial life accidentally unleashes a threat of a very terrestrial origin.

Review: This short reprint from 1957’s Journey into Unknown Worlds #56 is a slight story but does offer above-average art.

Grade (for the entire issue): B

Cool factor: The supporting cast is starting to round into shape.
Not-so-cool factor: The racial and sexual norms of the early 1970s can make this series a bit off-putting from today’s vantage point.