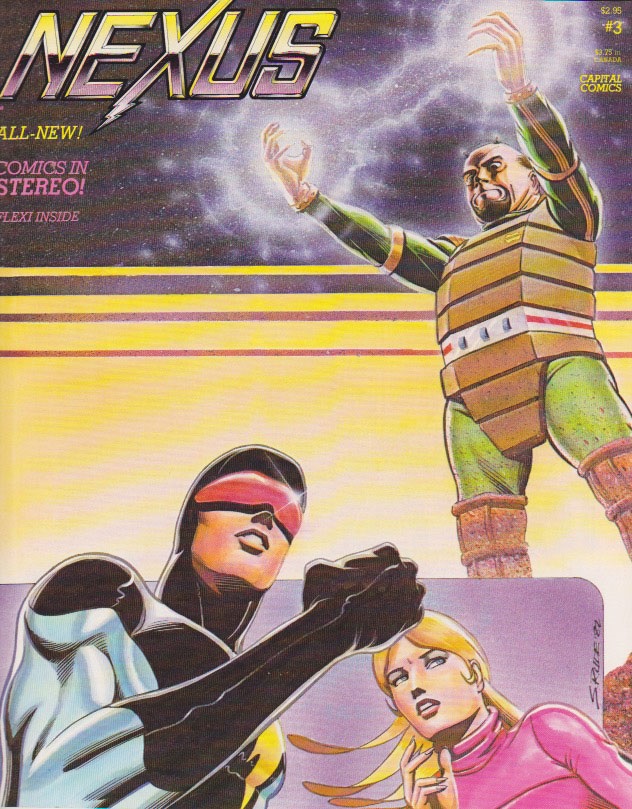 Capital Comics – the one-time publishing arm of the now-defunct distributor, Capital City – was a line of titles that were revolutionary in content, with its offerings of The Badger, Whisper, and, of course, Nexus. Of these now-classic comics, it is Mike Baron and Steve Rude’s Nexus that has lasted the test of time in its various comic book products and through its numerous publishers. But, in the very beginning, when it was first released in the early 1980s, Nexus was also revolutionary in its format.

Not only was the book originally offered in its first triad of issues using a magazine format, but it also included a 33-1/3 RPM “Flexi-Comic” record. And, cover-dated October 1982, Nexus Volume 1 #3 didn’t just include a wonderful story starring Baron & Rude’s space-spanning vigilante, but it also sported a brilliant back cover by comic veteran and illustrator extraordinaire Frank Brunner. Not bad, eh?

In a galaxy of comics, finding this collectible title is a rarity – but when you do, you will feel like a star yourself.