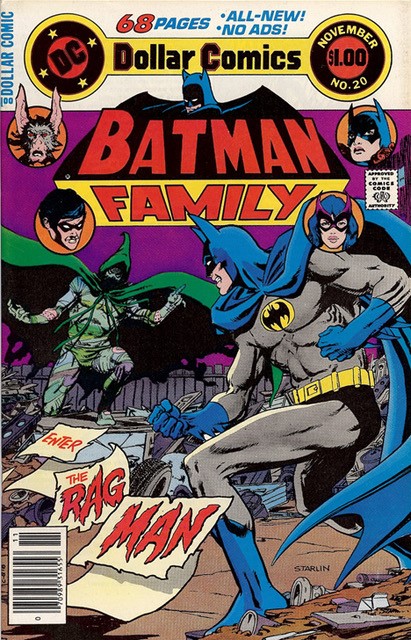 Title: “Enter the Ragman!”
Synopsis: Batman teams with Ragman to expose a criminal organization that is preying on poor tenement dwellers.

Review: David V. Reed might not be a fan-favorite writer, but he’s crafted a fine little tale here. Batman and Ragman work well in the same universe, and Michael Golden was born to draw both characters. His elegant figure work and dynamic storytelling make this book a gem.

Review: A silly story with weak art. Its placement after such a strong Batman lead feature does this tale no favors.

Title: “Private Eye Man-Bat”
Synopsis: In need of a job, Man-Bat tries to convince private investigator Jason Bard to hire him as a partner.

Review: Bob Rozakis’ script tries too hard, but the art here is spectacular; Golden is one of the era’s best pencilers.

Title: “Trial By Fire”
Synopsis: The Huntress uncovers another criminal plot to cash in on the poor tenement dwellings of Gotham City.

Grade (for the entire issue): A-

Notable: Continuing to experiment with their Dollar Comics format, DC released this issue with no ads.

Character quotable: “I have no quarrel with you, Batman … I’m after Bruce Wayne!” – The Ragman, tatterdemalion of justice