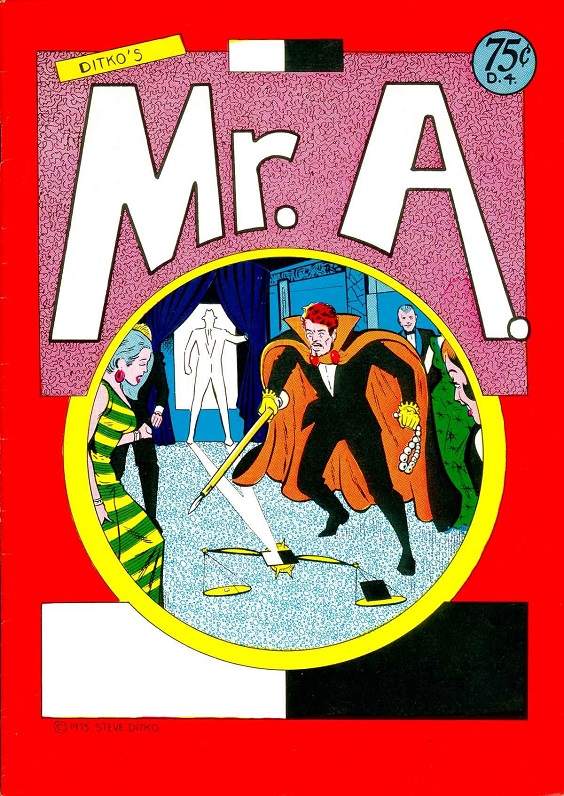 It took two years after the Bruce Hershenson-published Mr. A for comic book legend Steve Ditko to return to what many believe to be his ideal hero – the comix icon of objectivism with the black and white calling card. Cover-dated 1975 with a whopping 75¢ price tag for a 32-page, black and white issue, Mr. A #2 was expected to be another foray into hardboiled justice, but instead read more like a traditional superhero story.

Still, Mr. A marked a shift for Ditko from working for mainstream publishers like Marvel and DC to more creator-owned projects. And, to that end, Mr. A #2 continued chronicling the darkly heroic tale of Rex Graine, newspaper reporter extraordinaire for the Daily Crusader who is known for his uncompromising principles and incorruptibility. In order to fight crime, Graine dons metal gloves and a steel mask that resembles a placid face. Mr. A’s outfit is also completely white.

In addition, Ditko’s Mr. A uses half-white/half-black calling cards to announce his arrival, as well as to represent his belief that there can only be good and evil – no moral grey area whatsoever. The vigilante’s calling card can be seen all over the cover of this hard to find independent key, which introduces a more traditional villain for him to fight – the mysterious Count Rogue. But no matter how powerful this foe is, he is no match for Mr. A’s deadly philosophy of absolute justice.

And, let’s face it, you are no match for not picking up this timeless treasure. To Ditko, “V” may be for vigilante, but when it comes to Mr. A #2, it also stands for value.