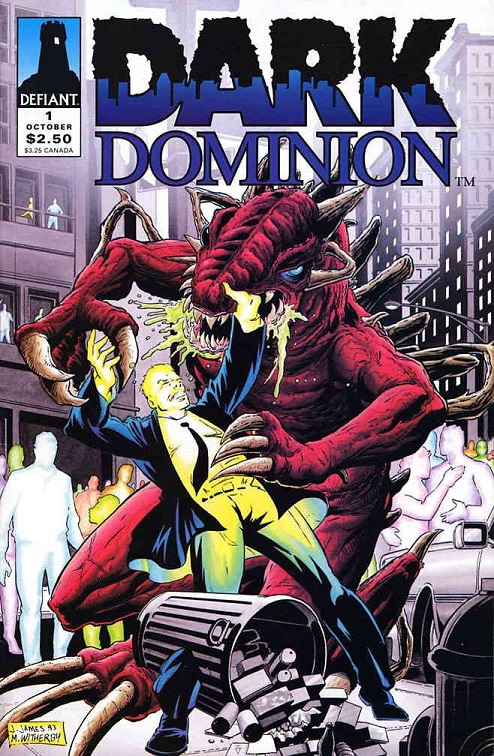 Cover-dated October 1993 – and just in time for the Halloween of that year – Dark Dominion #1 from DEFIANT caught the attention of expectant readers for both the right and wrong reasons. Let me – or rather Jim Shooter himself – start from the beginning.

According to Shooter, shortly after Marvel dismissed him, he and a group of investors attempted to purchase Marvel in 1988. The attempt failed and instead the group launched Valiant and helped found Voyager Communications (the parent company of Valiant).  Then, when the company was starting to catch on in the industry, Valiant allegedly ousted Shooter in 1992 after helping build the company and spearheading its incredibly successful Unity crossover. The comic book wunderkind, together with several of his co-workers, went on to form Defiant in early 1993 – securing financing from trading card company, The River Group, and creating Enlightened Entertainment Partners, LLC.

In a recent interview with Alan Weiss, the comic book veteran revealed: “(Steve) Ditko was recruited early on by Shooter, because he was one of (the former editor in chief’s) early heroes. Jim created a whole book that was meant to be Steve’s – which was Dark Dominion. Which is a really great title, if you ask me? It doesn’t say what it is at all, but it is enticing. Frankly, I would have thought a book entitled Dark Dominion would be like House of Secrets anthology book, but the actual idea of it was a good one. The fact that was created specifically for Ditko – including Michael Alexander’s apartment looking just like Ditko’s – had a nice validity to it.

“But ultimately, Ditko did not want to do it because it was too unreal and did not follow his Platonic view of reality. The book had monsters, and monsters did not really exist in the real world, so he did not want to draw them.”

Fans instead got a story by Len Wein – and an impressive cover by then-newcomer Joe James. Previewed in the back of the Dark Dominion #0 card binder, it was met with great fan interest. All these years later, it still is.