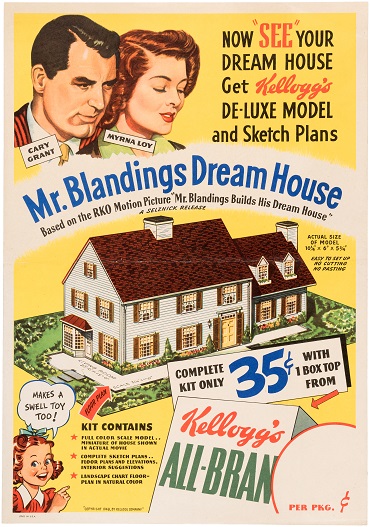 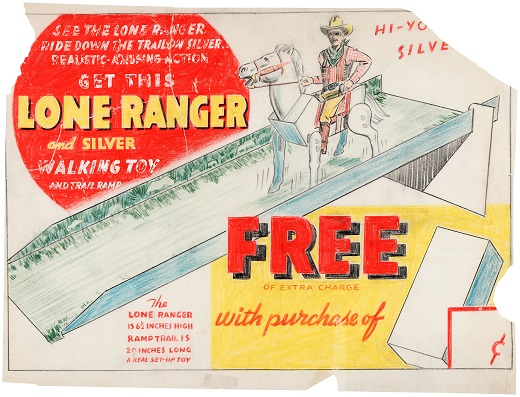 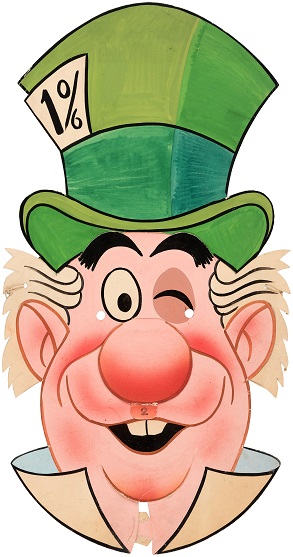 Hake’s Americana & Collectibles Auction #221 is open for bidding! One exceptional highlight to this year’s auction is the Gold Premium Archives. Sam Gold and his son, Gordon, worked together for a number of years with their company, American Advertising & Research Corporation. This company produced children’s books, direct mail, displays, and premiums. Sam and Gordon’s combined 60 years in the business completely revolutionized how companies marketed their products. The vast collection featured at Hake’s includes rare pieces from the “Kings of Premiums,” including original art, prototypes, promotional material, signs, premiums, and more.

Featured in lot 2189 is a prototype original art sign promoting a 1940s Kellogg’s Pep cereal premium button set. The art depicts an array of buttons with preliminary art of movie stars such as Roy Rogers, Judy Garland, and Ethel Merman.

Showcased in lot 2192 is a single-sided paper sign featuring images of Cary Grant and Myrna Loy, from Mr. Blandings Builds His Dream House, overlooking a drawing of the titular “Dream House.” This premium was offered for 35¢ and one Kellogg's All-Bran cereal box tops in 1948.

Highlighted in lot 2210 is prototype original art for a 1930s premium Lone Ranger toy. The art includes a sheet with original art of the store display, and an example image of the ramp walker toy set up. It was Sam Gold’s experience in designing the Mickey Mouse Waddle Book that led to developing this and the following lot.

Included in lot 2211 is prototype original art for two 1930s premium walking toys as well as box that would contain them. The art reads: “Buck Rogers Comic.... Walking Toys - They Actually Walk,” and shows rough images of the two toys.

Lot 2214 features five pieces of mixed media prototype original art for the Curtiss Candy Company promotion in the 1950s. The store sign art features Dick Tracy and reads, “Dick Tracy - Calling All Kids! 18 Of Us Comic Characters Are Waiting For You!” A mock up of the promotional book features outlines of 18 premium statuettes, listed as Smokey Stover, Pops, Shadow, Harold Teen, Smitty, Herby, and others.

Featured in lot 2216 are seven pieces of prototype original art for signs and packaging for the Popeye Model Navy premium from the 1930s. Five sheets feature images of Popeye presenting the premium, while the other two sheets include ship images of the “Battleship, Cruiser, Destroyer, and Aircraft Carrier.”

Showcased in lot 2231 is prototype original art for the “Dopey Bubble Gum” store sign promoting the Dopey Ventriloquist Dummy premium in 1938. Art on the sign depicts a boy wearing the Ventrillo Mustache and operating the Dopey Dummy.

Lot 2234 features a pair of hand-cut and painted stiff paper mask, depicting the Mad Hatter and March Hare from Disney’s Alice in Wonderland. Both masks were produced by the Einson-Freeman Company in 1951.

Highlighted in lot 2276 are hand-painted prototypes for the Borden’s Instant Dutch Chocolate premium in 1962. The prototype features all four characters that were produced – Mr. Green Jeans, Mr. Moose, Captain Kangaroo and Bunny Rabbit. An additional prototype includes art for Grandfather Clock and Bear – characters which were not produced.

Bidding for these exceptional pieces, and countless others from the Gold Premium Archive, closes on July 11-13, 2017. Head over to hakes.com to get started on bidding today!