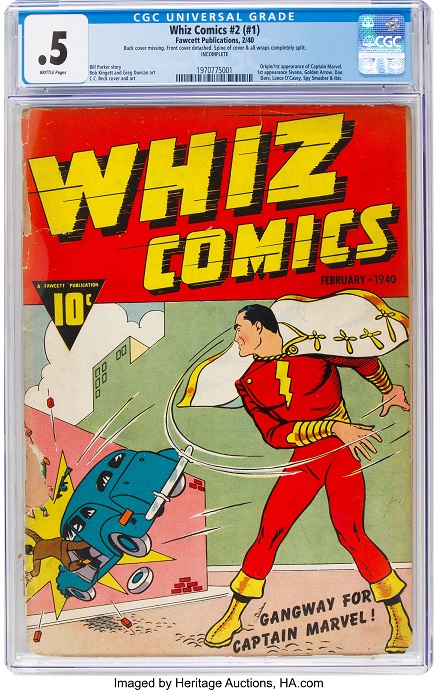 A copy of the rare issue that includes the origin and first appearance of Captain Marvel is among the most appealing lots being offered in Heritage’s Sunday Comics, Animation & Art Weekly Online Auction, which closes November 10, 2019, on HA.com.

Whiz Comics #1 CGC 0.5 contains the debut of Captain Marvel, plus the origins and first appearances of archenemy Sivana, superheroes Golden Arrow, Spy Smasher, and Ibis the Invincible, and detectives Dan Dare and Lance O’Casey, each of whom later had a Whiz Comics of his own.

Even at this grade, interest is already growing for the book that currently sits at No. 13 on Overstreet’s “Top 100 Golden Age Comics” list. The CGC notes include the fact that the back cover of the issue is missing, leaving the front cover detached, and the spine of the cover and all wraps are completely split.

This auction is filled with 929 lots of comics, original art, and memorabilia. Bidding opens at 6 PM CT on HA.com.