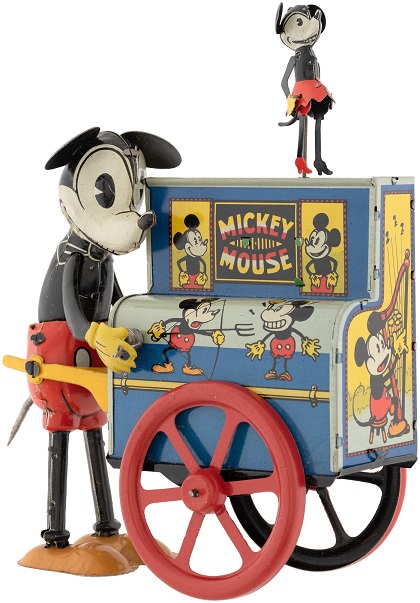 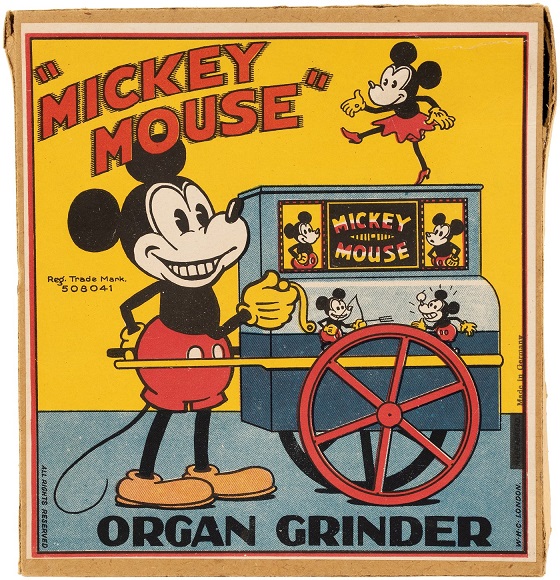 Disneyana has long been a popular category in Hake’s Auctions, which once again proved very desirable in their November Auction #228. A Mickey Mouse organ grinder Hurdy Gurdy boxed wind-up toy from 1930 hammered for $32,450.

“There are always three main factors involved with the value of an item: condition, rarity, and desirability. When all three of these are at the highest level, anything can happen at auction. Such was the case with this all-time classic Disney toy,” Hake’s President Alex Winter said. “We had high hopes for Mickey, and we were not disappointed. The reaction by collectors to the condition is what we expected, everyone was stunned to see such a high grade example as well as a previously unknown example. That led to our record price and rightfully so, when it comes to Disneyana this is a showstopper.”

The toy was originally made in Germany by Distler, and this example comes from the original English owner, who bought it new in the 1930s. This tin litho toy is often found with missing or replaced parts, but this example is 100% complete and all original. The large Mickey figure is attached to and pushes a street organ that features multiple images of him. A separate small Minnie Mouse figure is attached to the top of the street organ; this Minnie figure is usually missing in other examples. The toy is functional, and as Mickey turns the crank, Minnie dances and musical notes are produced.

This is one of the most coveted 1930s Disney toys, especially with the seldom seen box, and is the nicest example that Hake’s has seen offered in their 52 years in the business.

This toy was one of many impressive results achieved in Hake’s Auction #228. All prices include an 18% buyer’s premium. The top sales from Part I and Part II can be viewed on the Hake’s website.