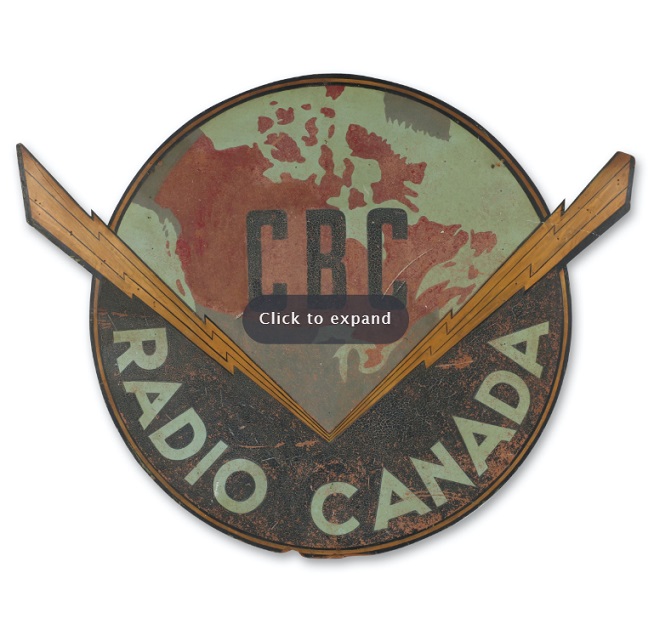 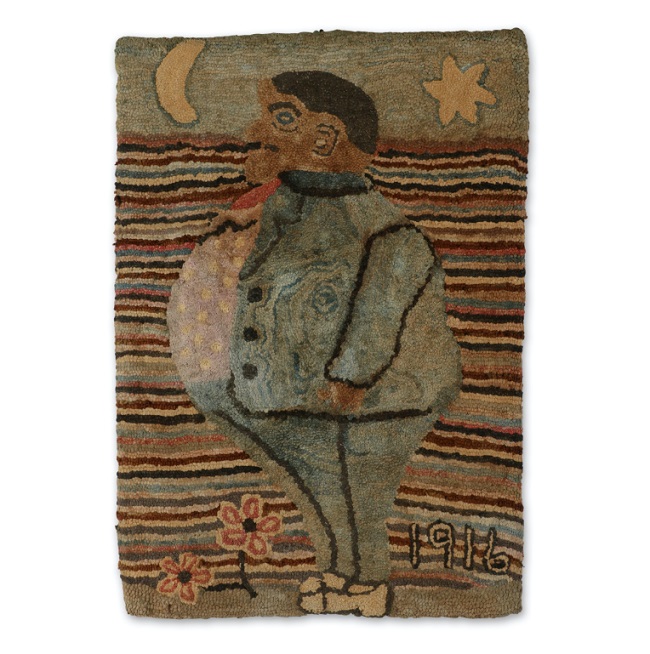 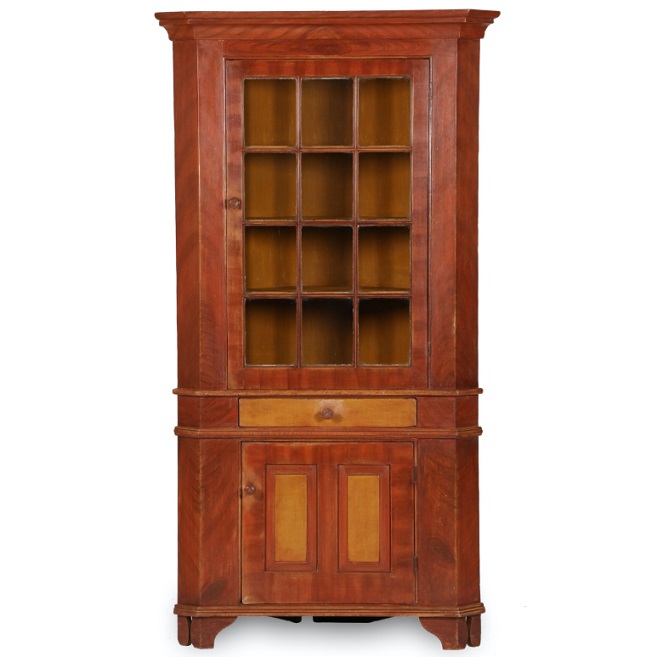 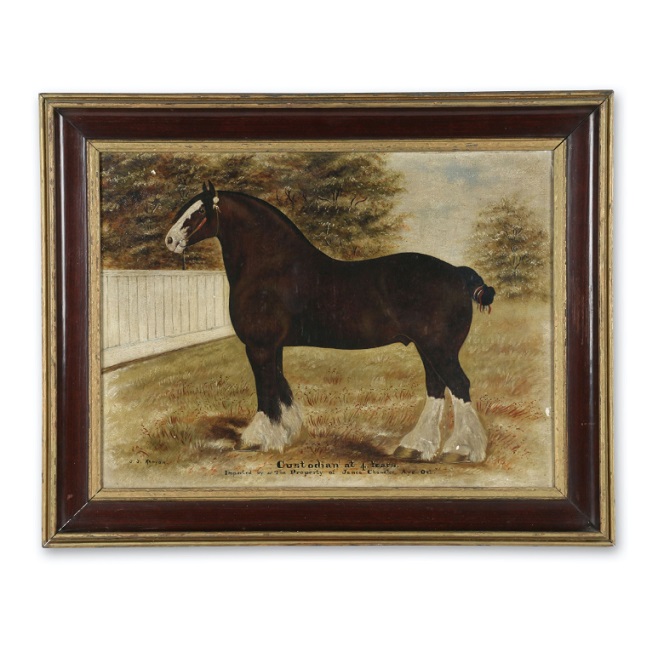 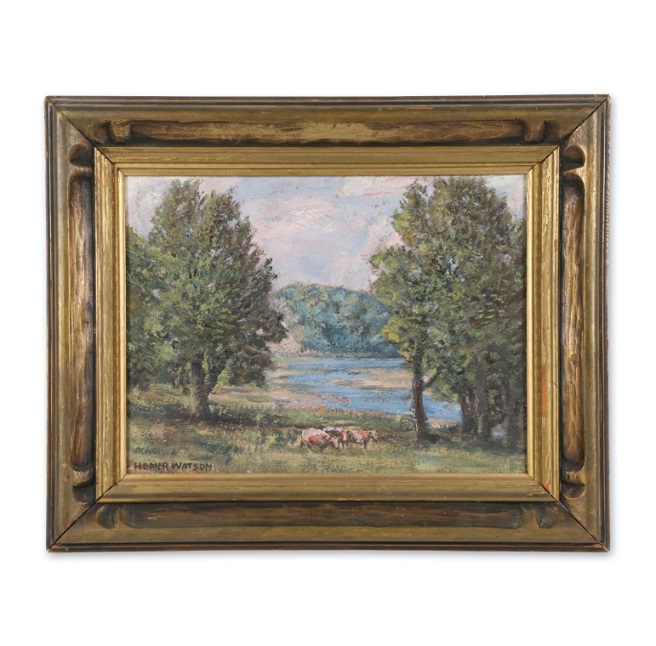 The auction was held online and in the Miller & Miller gallery located at 59 Webster Street in New Hamburg, Ontario. It was headlined by the collection of the late Don Pero – a quiet but passionate collector of old school primitives, from pottery to furniture to folk art – and select offerings from the collections of John Wine and Jim Fleming, both pioneer collectors of pottery and folk art.

The iconic Canadian “Fat Man” wool and burlap hooked mat dated 1916, perhaps Ontario’s most recognizable hooked rug, was the auction’s top lot. It had strong colors and an imposing stature of the “Fat Man,” measuring 40 inches by 29 inches. The book Canadian Folk Art to 1950 said of it, “The graphic and visually appealing composition of this rug can scarcely be improved on.”

The original artwork category was plentiful and led by an oil on canvas painting of a horse by the Canadian photographer and painter J.J. Kenyon (Oxford County, 1862-1937). Measuring 23-1/2 inches by 17-1/2 inches (sight), the beautifully rendered work nearly doubled the high estimate of $6,000. Kenyon attended fairs to capture images of prize-winning animals that he later painted.

The circa 1940 CBC Radio Canada sign, depicting the original logo for CBC Radio Canada from 1940-1958 and designed by Ecole des Beaux Arts student Hortense Binette, 61 inches by 48 inches, sparked competitive bidding. The sign – likely one of a kind – was made from wood-backed Masonite. It had the original painted surface, with just some crazing and minor scratches.

The oil on canvas figural landscape by Canadian artist Homer Watson (1855-1936), probably painted around 1910 near Kaufman Flats, Doon and titled Cattle by Stream in Woods, 16 inches by 12 inches (sight), also nearly doubled its high estimate to hit $6,900. Proceeds from the sale of the signed work were donated by the seller, Nancy Silcox, to the Australian Wildlife Fund.

The 640 curated lots of historic artifacts in the sale included primitive and fine furniture, early pottery, fine art, folk art, historic objects (to include advertising and ephemera, military items and toys) and decorative arts (to include lamps and lighting, bronzes and statues). Nearly all the lots in the auction carried a strong Canadian theme. By any measure, the sale was a huge success.

“This auction attracted collectors and dealers from across Ontario, including many who braved extreme weather from the Ottawa region, while others chose to bid from the comfort of home,” said Ben Lennox of Miller & Miller Auctions, Ltd. “The collecting community of Canadiana and pottery was abuzz for weeks prior to the auction. The top 15 lots were as diverse as the sale.”

“The volume of good material from the Fleming, Pero and Wine collections was well presented, in a top notch, roomy facility. The staff was great and there was good lighting and big screens with seamless online and live bidding. Justin and Ethan Miller auctioned nonstop at 90 lots per hour,” Chris Spick, a collector and co-owner of the Bowmanville Antiques & Folk Art Show, said.

Mr. Spick pointed out that keeping the crowd entertained, fed and watered “was a task unto itself,” adding, “Signing up to bid and paying at the end of the day was quick and efficient. Considering the state of furniture sales in the market today, it was refreshing to see stronger numbers than in the past couple years. An example was lot 234, the narrow glazed cupboard.”

He was referring to a two-part, 19th century glazed dish dresser in the form of a chimney cupboard. The 77-inch tall piece had a nice old dark finish and an estimate of $900-$1,200, but it ended up fetching $3,450. Also, a lovely Waterloo County painted corner cupboard made in Preston the second half of the 19th century and retaining its red and mustard grained painted finish, 40 inches tall by 81 inches wide, sold within its $4,000-$6,000 estimate to bring $5,750.

Following are additional highlights from the auction, which attracted 200 people to the gallery and a more than 400 registered online bidders who placed 7,393 bids across several platforms (LiveAuctioneers.com, Invaluable.com and Miller & Miller Live). Fifteen phone bidders placed bids on about 50 lots. The auction grossed $350,865. All prices quoted are in Canadian dollars.

An oil on canvas painting by Canadian artist Manly MacDonald (1889-1971), titled Spring Willows by a Mill, signed in the lower left corner and measuring 19 inches by 25 inches (sight), changed hands for $3,835; while a well-documented, two-sided oil on canvas folk art rendering of a young girl and her spaniel dog with a mother and child (verso), nicely housed in a wood frame and painted by an unidentified Canadian artist sometime in the 1850s, rose to $3,450.

A T. Ketland Co. flintlock rifle with Indian trade token, stamped “Ketland” with Birmingham markings on the barrel and lock plate, restored, with some minor pieced-in repair to the trigger, the barrel length 36-1/4 inches, hit the mark for $3,900. Also, a pair of molded form, earthenware picture frames with a rockingham glaze, attributed to The Brantford Pottery in Canada (1849-1907), each one measuring 12 inches by 10-3/4 inches, gaveled as one lot to hammer for $3,450.

A Canadian late 19th century folk art spruce gum box, intricately carved with original dark paint and varnish, one side showing five hearts and the other side four hearts and a cross, and on the spine the words “Livre de piete,” knocked down for $2,588; while a gray painted pine dry sink, probably made in Perth County, Canada, with raised back, shaped sides, a lower single door with two oval panels and raised panels to the interior, with an old gray painted finish, earned $2,875.

Two Canadian hooked mats joined the “Fat Man” on the list of top lots. A Waterloo County floral mat from the Wellesley area, decorated with pots of flowers surrounded by a border of colored balls and intersecting waves, 41 inches by 20-1/2 inches, achieved $3,600; and a late 19th century Ontario folk art mat depicting two chickens flanking a central flower pot surrounded by nice abstract and floral designs, 27 inches by 42 inches, went to a determined bidder for $3,450.

Miller & Miller Auctions is Canada’s trusted seller of high-value collections and is always accepting quality consignments. The firm specializes in watches and jewelry, art, antiques and high-value collectibles. Its mission is to provide collectors with a trusted place to buy and sell.

To consign a single piece, an estate or a collection, they can be reached at (519) 573-3710 or (519) 716-5606 or email info@millerandmillerauctions.com. To learn more about Miller & Miller Auctions and the firm’s calendar of upcoming auctions visit www.MillerandMillerAuctions.com.