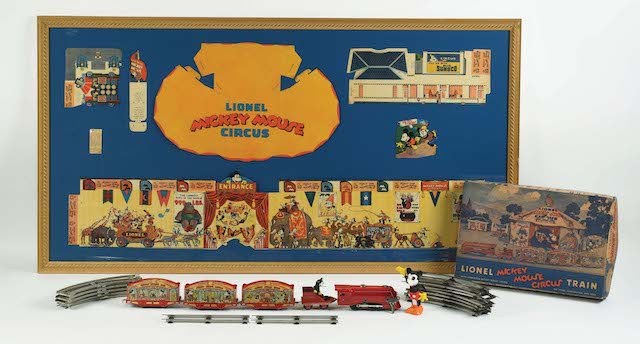 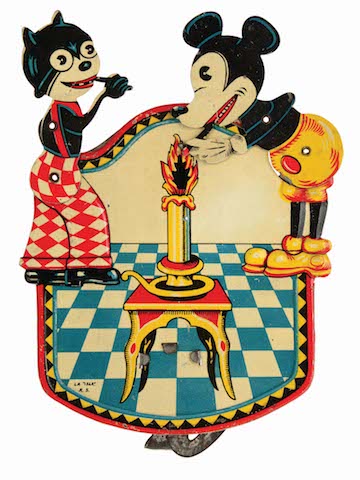 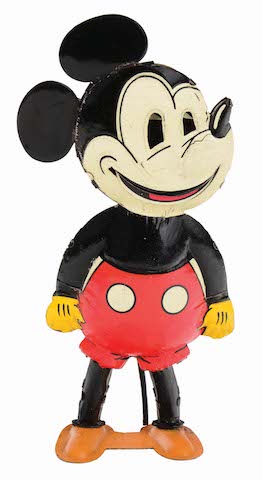 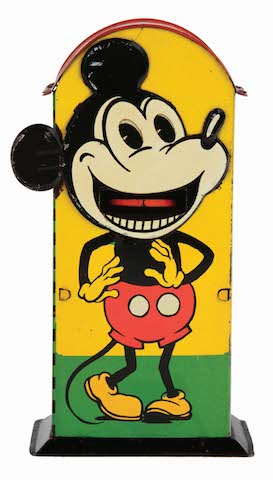 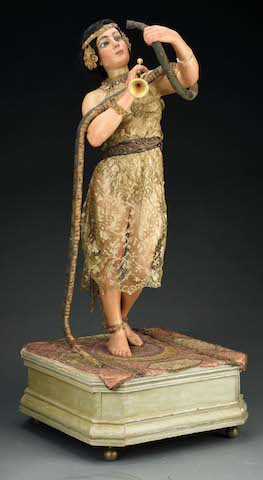 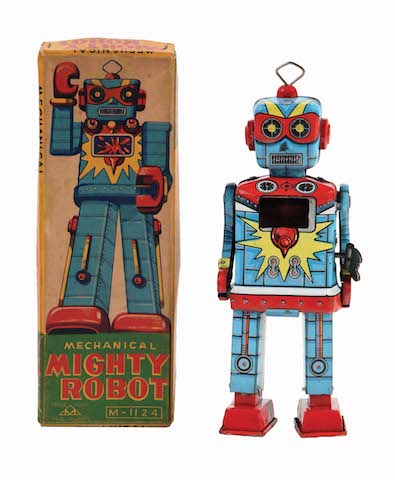 “A fantastic sale with extremely strong prices” is how Morphy Auctions’ President Dan Morphy summarized the upbeat toy and bank event held live on March 10-11, 2020, at the company’s central Pennsylvania gallery. Nonstop phone and internet bids kept the Morphy team hopping as collectors from around the world chased pristine toys from two featured collections in a sale that totaled $1.6 million.

One of the rarest of all figural Mickey Mouse toys, a lithographed tin wind-up five-finger Mickey made in Germany for the English market, led the parade of Disney mice. The classic depiction of the beloved cartoon rodent – standing 9 inches high with moving pie-eyes and an articulated mouth – dances to and fro when activated. Against expectations of $20,000-$40,000, the coveted treasure from the Landes collection took a bow at $64,575, making it the top lot of the sale.

Perennially popular with Disney fans, a German tin-litho Mickey Mouse mechanical bank – one of four versions attributed to Saalheimer & Strauss – attracted many hopeful bidders. This particular version from a well-known series of banks is known for its appealing graphics and action. When a coin is deposited, Mickey’s tongue emerges, adding a humorous touch. A Landes collection favorite, it sold for $35,670 against an estimate of $15,000-$25,000.

Every Disney toy collector longs to own one of few known examples of Isla’s (Spanish) pre-1936 sparkler toy depicting a naughty Mickey Mouse and Felix the Cat taking turns lighting up cigars. The clever design incorporates a visible “spark” from a candle placed on a table before the cartoon duo. Another extreme rarity from the Jeff Landes collection, it sold for $25,830 against presale expectations of $8,000-$12,000.

Perhaps the ultimate crossover toy within the five-star lineup was the Lionel Mickey Mouse Circus train set in its original box, which attracted collectors of Disney toys, trains, and circus-related items. In clean condition with a composition Mickey Mouse “barker” figure, key-wind Lionel Lines engine, tender and attractively decorated cars, the set is one of very few to retain its cardboard segments and tickets in unpunched condition. It blazed to $29,520 against an estimate of $10,000-$20,000.

A Japanese wind-up Mighty Robot with original box showed off a medley of blue, red and yellow graphics along with oxygen tanks on its back and a sparking action visible through its plastic chest plate. Together with its rare original pictorial box, the diminutive spaceman commanded $41,205.

Yet another specialty category with which the Morphy name has become synonymous is antique marbles. In the March 10-11 auction, a boxed set of Original M.F. Christensen & Son Company No. 1 Cornelian Marbles – all specimens presenting in mint condition – sold for $11,070, more than three times the high estimate.

Cast iron highlights included a straight-base variation of J & E Stevens “Race Course” or “Horse Race” mechanical bank in original, near-mint condition. Accompanied by its rare factory box, it settled within its auction estimate range at $29,520. One of five beautiful figural cast iron blinking-eye clocks in the sale, an 1860s-1870s French production depicting a Samurai warrior sold for $19,680 against an estimate of $5,000-$8,000.

An array of antique European automata included creations by French makers Leopold Lambert, Gustav Vichy and Jean Roullet, whose “Snake Charmer” automaton portraying an exotic dancer with a serpent finished near its high estimate at $55,350.

Morphy’s Coin-Op & Antique Advertising Auction featuring the most important collection of mechanical music machines the company has ever handled, has been rescheduled for April 25-26. For additional details on that sale or to view the March 10-11 toy auction catalog complete with prices realized, visit www.morphyauctions.com. Morphy’s can be contaced by calling (877) 968-8880 or emailing info@morphyauctions.com.