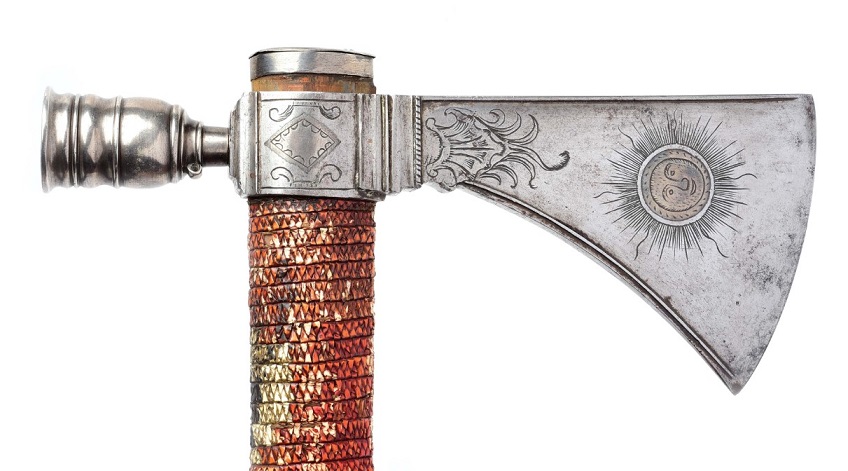 A circa 1765-1770 Revolutionary War presentation pipe tomahawk made by future army general Richard Butler and inscribed to Lieutenant John McClellan of the Pennsylvania Riflemen was sold yesterday by Morphy Auctions in Lancaster County, Pennsylvania for a staggering $664,200, inclusive of buyer’s premium. It is a world record auction price for any tomahawk.

“Because of its historical importance and incomparable line of previous ownership, there was great interest in the tomahawk in the days leading up to the auction. We knew ahead of time that a couple of serious players would be competing for it,” said Morphy Auctions founder and president Dan Morphy. “There were six phone lines in use when the bidding opened at $240,000. It quickly escalated and was sold to an American buyer.”

Arguably the most important and best known American tomahawk in existence, it was featured in the 2005 Clash of Empires: The British, French & Indian War, 1754-1763 exhibition of French and Indian War items commemorating the 250th anniversary of the conflict. Exhibition stops included the Heinz History Center in Pittsburgh, the Canadian War Museum/Museum of Civilization in Ottawa, and The Smithsonian in Washington, DC.

Displaying extremely fine workmanship, the silver-mounted and inlaid tomahawk was hand-forged and signed by Richard Butler, a respected armorer at Fort Pitt (PA) from 1765-1770. Butler's daybook, which is held in Carnegie Library, gives a record of his time at Fort Pitt and lists the many pipe tomahawks he made.

Born in Dublin, Ireland in 1743, Butler moved with his family to Lancaster, PA, at age five. Around 1760, the Butlers relocated to the nearby developing settlement of Carlisle, where his father worked as a gunsmith. The younger Butler apprenticed under his father at the gun shop, which still stands near the city’s Court Square.

In 1772, following his time at Fort Pitt, Butler was commissioned a captain in the Pennsylvania Militia. Over time, he gained the trust of Native Americans in the region and, in partnership with his brother, conducted fur trading with the tribes and also provided gunsmithing services. In 1775, Butler left the Pennsylvania Militia and became an agent of Indian Affairs for the region. He strengthened relations with the Shawnee and Delaware Indians, signing a Treaty of Neutrality with them. In 1776 he was commissioned a major in the Continental Army's 8th Pennsylvania Regiment. He fought with the riflemen at Saratoga and commanded the 9th Pennsylvania Regiment at Stony Point. Subsequently, he served as colonel of the 5th Pennsylvania regiment at Yorktown, and afterward remained in the Continental Army. In 1783 he was given an honorary promotion to brigadier general. He was one of five brothers who all served in the military and were known collectively as “the fighting Butlers.” Richard Butler was killed in 1791 at the Battle on the Miami River in Ohio.

Lieutenant John McClellan, the original owner of the beautifully inlaid, silver-mounted tomahawk sold by Morphy’s, was from the outskirts of Carlisle. He served with Company D of Thompson’s Battalion, Pennsylvania Riflemen, and carried the tomahawk with him to war. “Riflemen were required to carry tomahawks as secondary weapons, as their longrifles were not equipped for bayonets,” Dan Morphy said.

The tomahawk’s extensive line of provenance includes The Earl of Warwick (Warwick Castle, England), who loaned the tomahawk for display at The Tower of London; and other distinguished private collections in the US and UK. It is depicted on the cover of Indian Tomahawks & Frontiersman Belt Axes and appears in several other respected reference books.

Commenting on the $2 million auction session and the success of the Butler/McClellan tomahawk, Dan Morphy stated: “We’re extremely happy with the results of yesterday’s auction, which shows that the market is stronger than ever. It’s always exciting when a rare piece of history crosses the auction block, especially one that has passed through so many important hands and has been so well documented.”

Morphy’s three-day auction event continues with Extraordinary, Sporting, and Collector Firearms on Thursday and Friday, May 28-29, 2020.