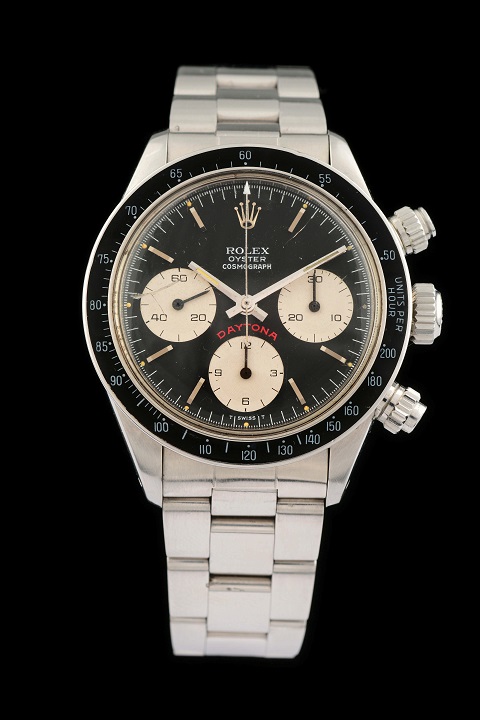 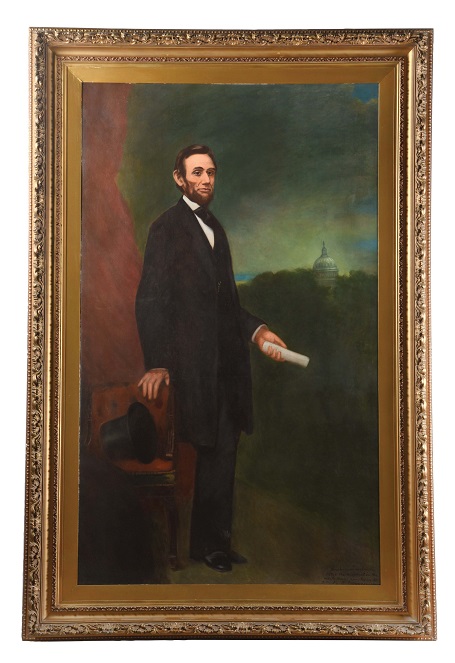 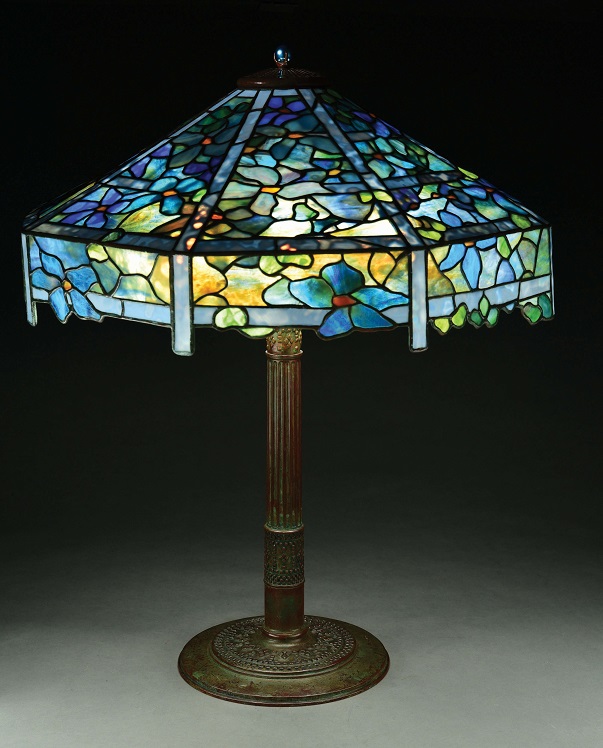 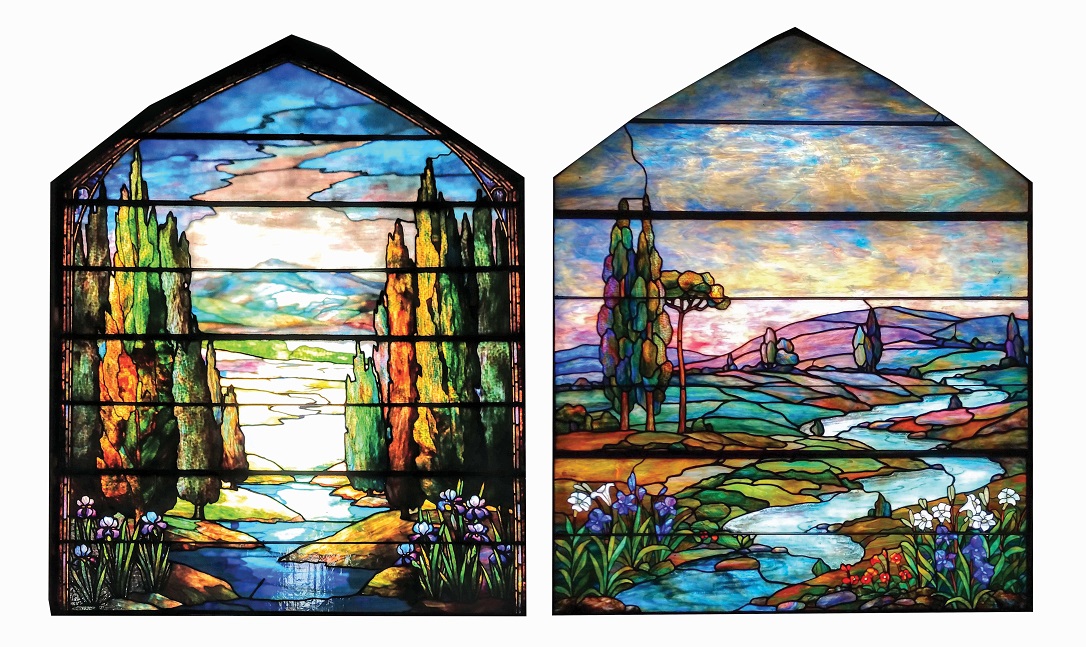 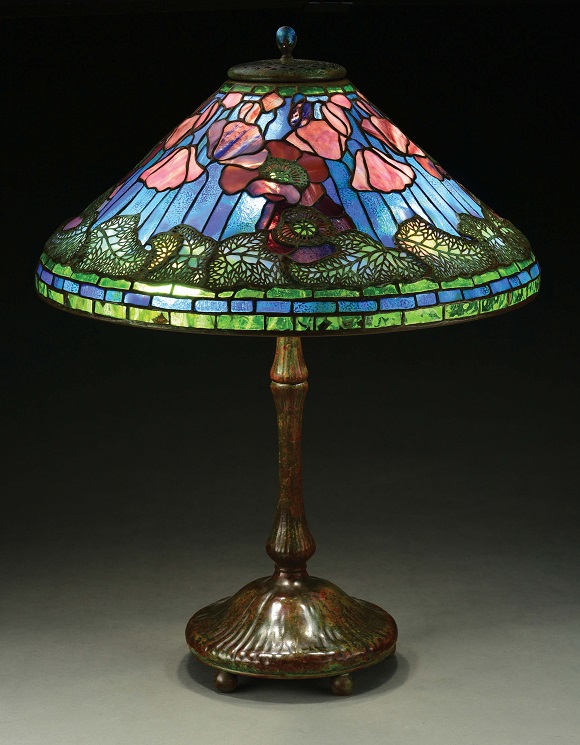 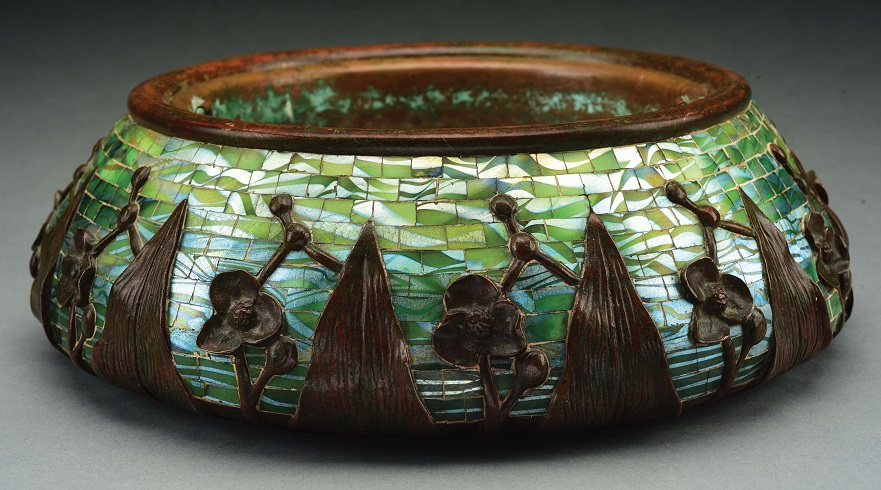 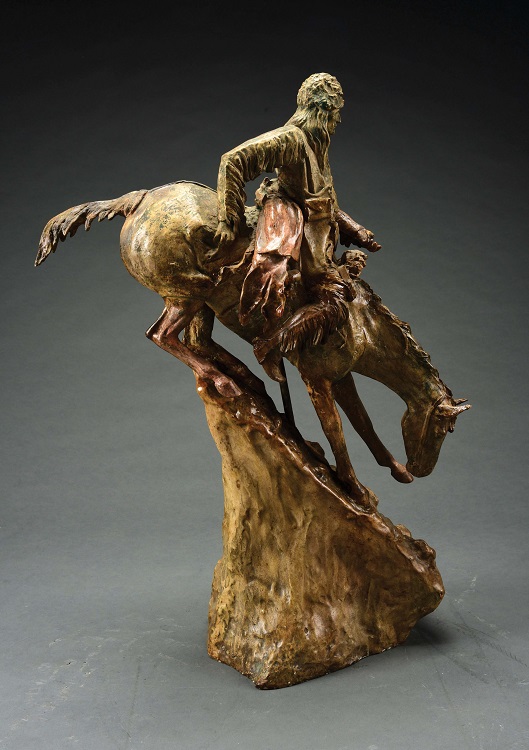 In 1880, Arts & Crafts visionary William Morris advised an audience at a British school of design, “Have nothing in your house that you do not know to be useful or believe to be beautiful.” This principle has endured for generations and seems a fitting theme for Morphy’s expertly curated July 14-15, 2020, Fine & Decorative Arts Auction. The select 1,339-lot lineup consists of premium-quality American and European glassware, Tiffany lamps, pottery, silver, jewelry, watches and Asian art – each object an example of how beauty and functionality can coexist and withstand the test of time.

The colors and radiance of Tiffany Studios glassworks illuminate Morphy’s central Pennsylvania gallery, where the live auction will take place. Fifty-four exquisite lamps in some of the most desirable Tiffany patterns are currently on display. Among the many pedigreed examples is a Tiffany “Poppy” table lamp with a signed and numbered shade decorated all around with vivid red and pink-to-white poppies and green filigree leaves against an intense mottled blue background with a confetti glass border. The shade sits atop a signed, patinated bronze Tiffany Studios “Decorated Library” table lamp base. Its prestigious line of provenance includes prior sale at Sotheby’s (Important Works of Art by Louis Comfort Tiffany, December 5, 1998). Estimate: $100,000-$150,000.

Extraordinarily rare, a Tiffany Studios “Clematis” table lamp has a signed leaded and stained-glass shade decorated with an intense mix of all-over blue, purple and pastel clematis blooms against a warm sunset background and blue/gray/purple trellis. The patinated bronze base is also signed: Tiffany Studios New York 553. Standing 32-1/2 inches tall, it comes to auction with an $80,000-$100,000 estimate.

A rare buying opportunity presents itself in the form of two five-panel windows attributed to Tiffany Studios and depicting an undulating stream in the countryside. One of the windows shows stately poplar trees and lilies bordering the stream on both sides. The second window, executed in jewel-like hues of amethyst, sapphire blue and teal, measures 41 by 80 inches and is similar to one that appears on page 55 of Alastair Duncan’s book Tiffany Windows.

“These two windows have been out of sight for 40 or 50 years,” said Dan Morphy, founder and president of Morphy Auctions. “They were located in a house in Philadelphia and have been in storage ever since being taken down in the 1970s.” The duo could realize $100,000-$250,000 on auction day.

An extremely rare signed Tiffany Studios 12-inch (diameter) “Arrowhead Fern” jardinière or planter was created with a mosaic pattern inlaid with iridized green-blue Favrile damascene glass and is attributed to Clara Driscoll, one of the “Tiffany Girls.” The piece is accented by a richly patinated bronze arrowhead decoration, and the bronze liner is signed Tiffany Studios New York 835. An Arrowhead Fern jardiniere is depicted in both Tiffany Lamps and Metalware An Illustrated Reference to Over 2000 Models by Alastair Duncan and Tiffany Desk Sets by William R. Holland. Auction estimate: $55,000-$65,000

A stunning collection of Webb cameo glass perfume bottles includes floral motifs in a wide range of colors, miniature and smaller-size bottles, and desirable avian-form figurals. Among those “feathered” friends are a light blue swan with dark blue beak, $6,000-$8,000; and three falcons: dark ruby to lighter red with a yellow beak, $2,000-$4,000; ruby with gold-painted ferns and dot highlights, $2,000-$4,000; and a rare white to yellow with yellow beak, carved by Max Erlacher of Corning, New York, $8,000-$15,000. A blown-mold perfume with a depiction of Neptune’s face in relief retains its original silver cap and is estimated at $5,000-$8,000.

The fine art offering consists of 26 European paintings and over 100 works by American artists. Leading the group is a historically important William F. Cogswell (American, 1819-1903) life-size portrait of Abraham Lincoln. In 1864, Cogswell was invited to the White House to sketch the president, the result being a full-length portrait of Lincoln on a porch with the US Capitol dome in the distance.

“The painting became the official White House portrait and is still displayed there,” Dan Morphy noted. “In addition to the White House portrait, Cogswell painted three replicas. He sold one to the State of California, where it now hangs in the State Assembly Chambers behind the speaker’s podium. The State House of Hawaii owns the second replica, and Cogswell kept the third.” The painting being auctioned by Morphy’s was displayed at Albion Castle, an 1870 mansion in San Francisco, the city where Cogswell was living at the time of his death. Its framed size is 108 by 72 inches and the auction estimate is $100,000-$500,000.

Fifty fine watches are included in the sale, including 18 outstanding Rolexes and other prized timepieces by Audemars Piguet, Vacheron Constantin, Franck Muller, and Invicta Lupah. A rare and iconic circa 1978 Rolex Oyster Cosmograph Floating “Big Red” Daytona with Oyster bracelet, Ref. 6263, boxed, is estimated at $100,000-$150,000.

A collection of 140 canes and walking sticks includes carved, chased, hammered and jeweled examples. Many include exotic materials and gold or silver trims. A circa 1851 “assassin’s” walking stick cane has a slit in the bottom of the ferrule that hides the assassin’s blade. Estimate: $4,000-$6,000. Another unusual entry is a doctor’s syringe walking stick cane with a large brass handle. One end of the handle holds a syringe, while the other conceals five glass vials with labels identifying their original contents, e.g., pilocarpin nitrate poison, morphine sulfate, etc. Estimate $2,000-$3,000

Other featured categories include Amphora pottery, bronzes – plus the original 1903 plaster model for Remington’s The Mountain Man, Asian art, jewelry, coins, napkin rings, and vintage Halloween and Santa postcards, some in large albums.

Morphy’s July 14-15 Fine & Decorative Arts Auction will be conducted live at the company’s gallery, 2000 N. Reading Road, Denver, PA 17517, starting at 10 AM ET on both days. All remote forms of bidding will be available, including absentee, phone and live via the internet through Morphy Live. Questions: call (877) 968-8880, email info@morphyauctions.com, online www.morphyauctions.com. The gallery is open for previewing Monday-Friday from 9 AM to 4 PM. Appointment to preview with an expert are available.